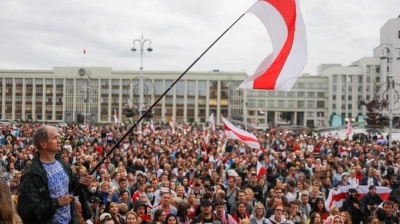 Protests in Minsk continue to defy the authorities with daily gatherings and song
By Ben Aris in Berlin August 26, 2020

Thousands of Belarusians defied police to gather once again on independence square in central Minsk to show their defiance of authorities and the police which has started to randomly arrest protestors again. The protests have become as large as those in 1991 during the collapse of the Soviet Union.

“Today's pro-Independence rally was essential to connect the dots between 1991 and 2020. We are witnessing the convulsions of the Soviet Union. Such a contrast to Lukashenka's "Anti-Maidan" rallies produced and designed by invited Russian consultants,” Franak Viacorka, a local journalist said on Twitter.

Under an overcast sky and intermittent rain the people gathered to listen to singers and held their phone lights aloft in what has become something of a tradition for coloured revolutions in the former Soviet world.

There were some fears that the protest movement was losing its momentum as Lukashenko launched an increasingly effective counter offensive last week. But the people  were reinvigorated by the massive March of the New Belarus demonstration on August 23 that attracted at least quarter of a million participants. Security services that had been deployed in the capital to break up and contain the protest were simply overwhelm and left powerless to act.

This demonstration like all the others was remarkable for its peacefulness. Earlier the same day shoppers in a mall near the government offices in Minsk burst into song lining the various levels around the atrium to sing an old Belarusian anthem that has been adopted by the protest movement turning the shopping mall into a cathedral in a moving display of both determination and the principles by which this revolution is being pursued.

Police vans were patrolling the capital and randomly arrested estimated 20-50 people in Minsk and other cites on August 25 according to reports shared on social media.

There have been some comparisons between Belarus and Ukraine’s Revolution of Dignity in 2014, but Ukrainian president Volodymyr Zelenskiy went on air to say he hopes Belarus will not go through the same pain as the Ukrainians did during their uprising.

“I don’t want the Belarus people to die or [suffer] bloodshed caused by the government. It is not too late for the authorities and the society to start a dialogue. Ukraine will not intervene. It is really their politics,” Zelenskiy said during an interview.

And more evidence of just how badly the presidential elections on August 9 were fixed by the authorities continues to emerge. The “real” results from polling station 21 in Minsk where shared on social media that show former English teacher and nominal victor in Belarus’ presidential election Svetlana Tikhanovskaya winning a landslide victory with 1,725 votes versus the 438 votes cast for Belarus' self-appointed president Alexander Lukashenko.

Despite obvious interference with the situation in Belarus – the Kremlin supplied Lukashenko with media professionals that allowed him to restart broadcasting after the entire staff of the state-owned company went on strike – officially Russia remains impartial and has also called on other western countries not to interfere.

The newly established Coordinating Council has gone out of its way to maintain a neutral stance to the countries that surround it, determined not to get sucked into the geopolitical stand off between the west and Russia. Tikhanovskaya reinterred those ideals very clearly in another video message on August 25, which was welcomed by the Russians.

“The Kremlin welcomes the statements of the representatives of the Coordination Council of the Belarusian opposition that their attitude towards Russia has not deteriorated,” Russian presidential spokesman Dmitry Peskov said in a statement.

Peskov added that the Kremlin doesn't see any threats to Russians or Russian business in Belarus. His comments referred to reports that Russian internet titan Yandex had decided to close its office in Minsk after it was raided by policemen in black uniforms and face masks. More than 300 IT CEOs have threatened to close their companies and move to adjacent countries because they say they cannot work in such a repressive atmosphere.