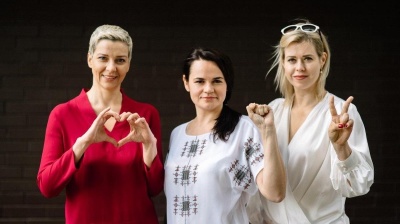 On July 19, Belarus saw its largest opposition rally in years as between 5,000 and 10,000 people, by different estimates, gathered in the country's capital Minsk to support Svetlana Tikhanovskaya, the leading candidate challenging long-time authoritarian leader Alexander Lukashenko in next month’s presidential election.

The rally in Minsk's Bangalore Square took place just days after Tikhanovskaya pooled efforts with the campaigns of opposition candidates Valery Tsepkalo and Viktor Babariko, who were excluded from the ballot.

Tsepkalo’s wife Veronika and Babariko’s campaign chief Maria Kolesnikova also spoke at the rally, with the three women becoming the faces of the anti-Lukashenko campaign.

Just months ago, 65-year old Lukashenko was expected to easily win a sixth term in the August 9 election after 26 years in power. But growing discontent over his handling of the country's economic issues, and, most recently, the coronavirus (COVID-19) pandemic, posed a challenge to his regime.

Several weeks ago, Lukashenko dismissed the pandemic as a "psychosis" and declined to introduce any lockdown measures, but the economic fallout from the coronavirus outbreak is still hurting Belarus. The World Bank predicted that the Belarusian economy will shrink by at least 4% in 2020.

Tikhanovskaya initially entered the presidential race instead of her husband, popular blogger Sergei Tikhanovsky, who was unable to present his registration papers in person, as he was jailed for staging protest rallies. He is currently still in jail and facing imprisonment on alleged public disorder charges that are widely believed to be far-fetched.

Since Tikhanovskaya announced her presidential bid, she has received threats against her and her young children, 4 and 10 years old. On July 20, the Belarusian news web site tut.by reported that her children had been safely taken out of Belarus to a European Union country, accompanied by their grandmother.

Romania officially becomes an emerging market
10 hours ago
Hackers release another 1,000 Belarusian police officers' names after OMON again ratchets up violence at weekend rallies
10 hours ago
Cargolux launches Shenzhen-Budapest cargo flights
11 hours ago
US flips Security Council the bird on Iran
1 day ago
Skopje tries to fix row with Bulgaria over revolutionary hero that could derail EU bid
2 days ago