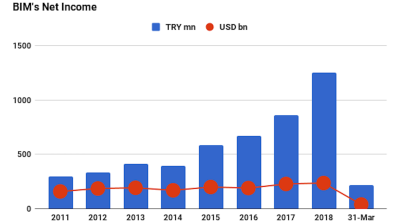 Turkey’s largest retailer BIM will issue a total of TRY304mn worth of bonus shares and distribute TRY729mn worth of cash dividends from its 2018 profit, according to an approval given by the company’s general assembly on May 21.

The total gross amount to be distributed as bonus shares and cash dividends from 2018 profit equals TRY1.03bn, or 83% of BIM’s TRY1.25bn net profit.

Cash dividends will be paid in two equal instalments and TRY1.2 per share in gross worth of the first payment will be delivered on June 12.

The second gross dividend payment worth TRY1.2 per share will be delivered on November 18, the company said on May 21 in a bourse filing.

100% bonus shares per share will be issued. As a result, the company’s paid-in capital will rise to TRY607.2mn from TRY303.6mn, the company said on May 21 in a bourse filing.

In 2014, BIM pledged to distribute a minimum 30% of its distributable profits in upcoming years.

BIM’s average cash dividend yield for the 9-year period between 2010 and 2017 stands at 1.61%, according to Seker’s calculations.