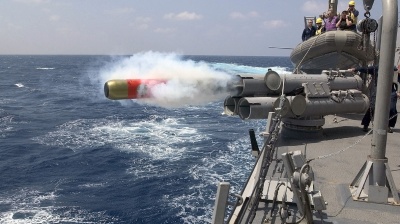 The ADC project is either sunk or listing. Only a change of government looks likely to refloat its investment plan.
By bne IntellIiNews February 23, 2020

Though Georgia’s government has torpedoed the consortium it asked to build a $2.5bn flagship deep-sea port on the Black Sea coast, there are few politicians in the small country that would openly declare that the long prized infrastructure ambition should be dropped—especially with the Georgian general election coming up later this year.

The prospect of building the port not only helps spread the feelgood factor among Georgians wanting affirmation that their country at the crossroads of Europe and Asia has solid economic growth prospects. It also helps to symbolise the desire among many in Georgia to move closer to the West, while limiting Russian and Chinese influence in their country—Tbilisi in 2016 very pointedly granted the right to build the deep-water facility to US-backed investors.

For now, ruling coalition and opposition parties are lobbing brickbats at each other over why it was that in January officials went ahead and terminated the government’s public private partnership (PPP) contract with the Anaklia Development Consortium (ADC). Although Georgian Minister of Economy and Sustainable Development Natia Turnava has moved relatively quickly to announce that a new tender for the development of the deep-sea port will materialise “very soon”, it seems unlikely that anything much will be settled until a new government is voted in an election that must take place by October. More likely is that the squabbling politicians will spend the time in the runup to voting day attempting to kick lumps out of each other in trying to pin the blame for the ADC disappointment.

The decision to announce a new tender “was absolutely logical, as Anaklia is our priority and we cannot allow any further delays,” said Turnava. She added: “The Ministry of Infrastructure, with our involvement, will review the terms and conditions, as they have undergone considerable modification since 2017 in favour of the investor. We are very hopeful that a new company will soon emerge as a result of a transparent tender. Of course, the Anaklia port will be built, this is our strategic priority and nothing will hinder it."

There are dark mutterings that the reason ADC did not get anywhere fast in progressing the project, and eventually had the project taken away from it, is that figures in the ruling Georgian Dream party want to see the contract for the big investment go to favoured and powerful business interests. Even darker mutterings suggest that efforts are under way to endlessly stall the project at Moscow’s behest, but there is only scarce and inconclusive evidence for the first conspiracy theory and hardly anything at all to put forward for the second.

By their actions, wittingly or not, officials have certainly sent the message that people associated with ADC are not in favour with the powers that be. Was that the reason why ADC failed to hit financing deadlines for Anaklia?

The government insists it has been entirely fair. Officials point out they gave additional time to ADC to fulfil its contractual obligations, but the consortium failed to replenish its capital with $120mn by finding a strategic investor to replace the US Conti Group, which pulled out from the project last year. ADC also failed to attract a $400mn loan from international banks, they added.

All is to play for. If Georgian Dream is toppled by opposition parties in the general election, ADC might conceivably get a second chance to realise its Anaklia project. Political landscape changes could consolidate the confidence of foreign investors which seem to be shying away from the project under uncertain political circumstances.

Levan Akhvlediani, ADC’s CEO, has, meanwhile, stated that the consortium plans to take the government to the international courts over the termination of the contract.

The initiative to build a deep sea port at Anaklia, located just a few kilometres from the Russian-occupied Abkhazia breakaway territory, appears to still enjoy strong backing from the US. In June last year, US Secretary of State Mike Pompeo said following a meeting with Mamuka Bakhtadze, then Georgia’s prime minister, that “[Anaklia deep sea port] project and others will enhance Georgia’s relationship with free economies and prevent Georgia from falling prey to Russian or Chinese economic influence. Those pretended friends do not have Georgia’s best interests at heart.”

The Kremlin is undoubtedly keeping up efforts to prevent Georgia on its doorstep from falling into a Western-orientated orbit, but it does not make public statements on Anaklia.

The imperative of achieving sufficient maritime economic development in the Black Sea region partly to service growing trade flows between Central Asia and Europe is, however, clear. Russia, for instance, recently announced it intends to build a deep sea port at Taman, on the Kerch Strait.

US companies’ investment strategies are mainly based on seeking economic rewards, but that does not mean lobbying from Washington to secure American investors, who will work to get Anaklia done, cannot take place. In fact, the probability of US companies featuring in the new Anaklia tender looks quite high with US congressmen quite active of late in calling for Georgia to work with the US in protecting and growing Georgian democracy.

Unfortunately for Western-leaning Georgians, for the US, the Black Sea does not have as much geopolitical importance as the South China Sea or Persian Gulf. But intensified competition between the US and China across Eurasia should, among other struggles for influence and more trade, keep the Anaklia port project afloat.