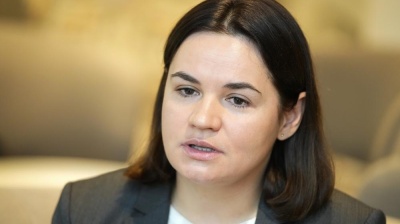 Latushka, and three other defendants – Maria Maroz, Volha Kavalkova, and Syarhey Dylevski – are charged with making public calls for sanctions against Belarus, inciting hatred, bribe-taking, and creating an extremist group.

All six are members of an opposition body called the Coordination Council led by Tikhanovskaya and Latushka. They all fled Belarus in the wake of a deadly crackdown on mass protests against the official results of the August 2020 presidential poll, which Lukashenko claims he won. The Belarusian opposition and Western governments say the election was rigged and that the real winner was Tikhanovskaya.

The trial has been condemned by the accused, the EU and several international human rights watchdogs. In a press release on Tuesday, the EU’s High Representative Josep Borrell called the trials against Belarusian activists, opposition politicians and journalists “brutal repression and politically motivated trials aimed at silencing any independent voices and closing all remaining space for democratic debate”.

As the trial began, the Minsk City Court rejected a request by the lawyers of Tikhanovskaya and a co-defendant, Paval Latushka, the chairman of the opposition People's Anti-Crisis Leadership group, to drop all charges against them and close the case.

Tikhanovskaya commented on the trial against her on Twitter, calling the trial a "farce" and "revenge" from Lukashenko, saying she had not been given access to court documents. The fact that she’s charged with 10+ crimes, with everything ranging from conspiracy to seize power and treason to terrorism changes nothing for her. The Belarusian opposition views it merely as a show trial, another display of power by Minsk to take revenge on  critics of the regime.

"These trials are not trials at all. It's a show. It's a farce and it has nothing to do with justice at all," said Tikhanovskaya, who lives in exile in Lithuania.

Instead of being at the trial, Tikhanovskaya spoke at the World Economic Forum in Davos, where she emphasised that Europe will not be secure without a democratic Belarus, adding that Belarusian President Alexander Lukashenko and others must bear full responsibility not only for the “terror” in Belarus but also for the war in Ukraine.

Today, the number of political prisoners recorded by the Belarusian human rights organisation Viasna exceeds 1,440 people and several other politically motivated trials have begun this year.

On Monday, a court in the Belarusian city of Grodno began its trial of a Polish minority activist from the Union of Poles (ZPD), Andrzej Poczobut. He’s being charged with “calls for actions aimed at harming national security,” and faces a maximum of 12 years in prison.

Belarus hosts a large minority of Poles, who have been persecuted by Belarusian authorities since 2020, likely as a form of revenge against the Polish government’s support for Belarusian opposition politicians and activists. In March 2022, Belarus released the president of the ZPD and deported her to Poland.

Last week, a trial also began against Nobel prize winner and human rights campaigner Ales Bialiatski. He faces up to 12 years in prison and his trial has been called out by the UN along with several human rights organisations.

Another Belarusian court also opened a trial against TUT.By journalist Maryna Zalatova and TUT.By’s general manager Lyudmila Chekina last week. Both were arrested in 2021 on tax fraud charges and several international journalist organisations have condemned their arrest and their subsequent ongoing trial.

Belarus faces new sanctions by the EU and asset seizures by Ukraine
Belarus Corruption Watch: How one of Lukashenko’s 'wallets' evades sanctions
VISEGRAD BLOG: When Eastern European states speak out they are now listened to