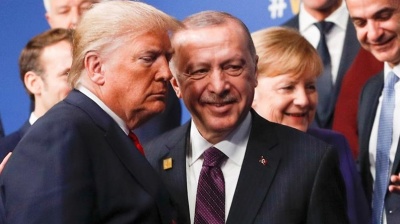 Populists in cahoots? Trump with Erdogan.
By bne IntelIiNews June 18, 2020

Pre-publication leaks of a new memoir, The Room Where It Happened, by US President Donald Trump’s former national security adviser John Bolton, have already put the book top of the US book charts.

In his damning indictment, Bolton argues that the House impeachment inquiry into Trump should not have been limited to the Ukraine affair, but should also have looked into, among other things, the president’s intervention with New York prosecutors’ investigations into Turkey’s Halkbank to curry favour with Turkish President Recep Tayyip Erdogan.

One incident reportedly described was a 2018 discussion with the Turkish president. Bolton says Erdogan gave Trump a memo claiming that a Turkish firm under investigation in the US was innocent. “Trump then told Erdogan he would take care of things, explaining that the southern district [of New York] prosecutors were not his people, but were Obama people, a problem that would be fixed when they were replaced by his people.”

bne Intellinews is one of a handful of publications that in the past year have argued that controversial aspects of the Trump/Erdogan relationship, such as the Halkbank affair, have been lost in the noise—they have not had the focus from US and global media they deserve because of the sheer amount of scandal surrounding the Trump administration. Nevertheless, this media outlet has run numerous pieces on the Halkbank issue in particular in the past couple of years. Links to a selection of articles that are free to access on our website are listed below. Other items are available on our subscriber-only IntelliNews Pro service.​ 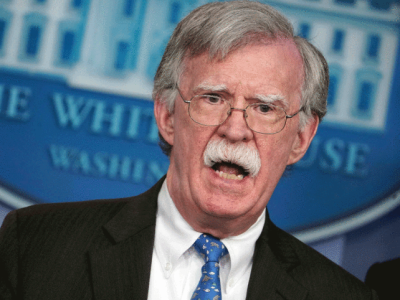 US attorney general ‘at Trump’s request made effort to help Turkey’s Halkbank sidestep indictment’
Turkish president Erdogan who has been implicated in the sanctions-busting affair in which lender is embroiled said to have pushed for White House action.
February 17, 2020.

HALKBANK AFFAIR: US judge orders Turkey’s “fugitive” state lender to attend Iran sanctions evasion hearing (with chronology of events)
Timeline of events so far centred on bank shows this is a case that could run and run. Roles of Trump and Erdogan in addressing affair under scrutiny.
October 24, 2019

New York judge tells Turkey’s Halkbank to turn up and enter plea in Iran sanctions busting case
Move must be made before state lender can challenge US court’s ability to hold trial, he adds.
December 5, 2019

TURKEY INSIGHT: Erdogan’s upcoming White House photocall whetting appetite of equity hit-and-runners
Beware, says analyst, “When a country's ruler resembles King Lear out on a moor in the storm, any calm is temporary and deceptive”.
November 6, 2019

TURKEY INSIGHT: Loan renewals for banks progress undeterred amid sanctions ‘noise’ and EBRD’s bourse exit
Development bank’s reported plan to make ‘protest sale’ of stock exchange stake hints that mounting difficulties are eating away at Erdogan’s regime but strongman is yet to face meaningful penalties from US or EU.
October 30, 2019

EBRD opposes naming of Halkbank executive convicted in US as Istanbul stock exchange boss
“We were not consulted and we do not support it,” says spokesman for development bank that owns 10% of Borsa Istanbul. Appointment widely seen as political rebuttal to New York indictment brought against state lender.
October 22, 2019