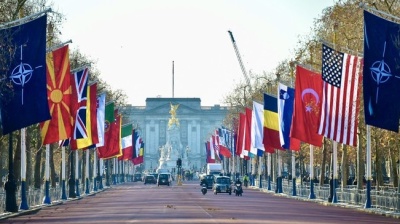 The December 3-4 summit in London is partly a celebration of 70 years of the Nato military alliance.
By bne IntelliNews December 3, 2019

French President Emmanuel Macron on December 3 accused Turkey of colluding with Islamic State proxies on the opening day of Nato’s London summit at which officials were discussing how to deal with Ankara’s threat to block a plan to defend the Baltic states and Poland against potential Russian attacks.

Turkey has said it will veto the plan unless the defence alliance backs its description of the mainly-Kurdish People’s Protection Units (YPG) militia, which the Turks are attempting to clear out of a border zone in northeastern Syria, as a “terrorist” group. That is a difficult proposition for Nato because the YPG provided the essential ground forces in the US-led destruction of the so-called Islamic State Caliphate that arose in Syria, losing around 11,000 fighters in the process. Although US President Donald Trump ordered US forces to step aside as Turkey in early October invaded Syria to attack the Americans’ ally, there is still a certain amount of solidarity for the YPG in the Pentagon, US Congress, Nato and among EU states.

December 3 also saw Nato secretary-general Jens Stoltenberg saying it was not right to question the Western alliance’s security guarantee for any members but that he was working to solve the dispute with Turkey over the allied plans to defend the Baltics. Reuters reported that asked if the issue could be resolved by the end of the summit, Stoltenberg responded: “I will not promise that, but what I can say is that we are working on that. But it is not like Nato doesn’t have a plan to defend the Baltic countries.”

Ahead of the summit, Polish President Andrzej Duda said he had spoken to Turkey’s President Recep Tayyip Erdogan about the Nato military plans that Ankara is blocking for the Baltics and Poland, saying that he hoped for a solution.

“They work with Isis proxies”

Macron said he supported Nato developing wider goals including combatting terrorism but added: “I am sorry we do not have the same definition of terrorism around the table. When I look at Turkey, they now are fighting against those who fight with us, who fought with us, shoulder to shoulder, against Isis [Islamic State]. And sometimes they work with Isis proxies.”

Turkey, said Macron, has to end its ambiguities towards these groups. “I understand they now want to block all the declarations of this summit unless we agree their definition of terrorism. It is not our definition,” he said.

Speaking in Ankara on December 2, prior to leaving for the Nato summit, Erdogan said Turkey expected unconditional support in its fight against terrorist threats. Ankara claims the YPG have links to Kurdish insurgents in Turkey, something the militia denies.

Although Trump, to the bewilderment of some senior officials in his administration, frequently praises Erdogan and seemingly shields him from meaningful sanctions, US Defense Secretary Mark Esper gave an interview to Reuters in which he agreed with Macron that Nato cannot label the YPD as a terrorist group. He said: “The message to Turkey … is we need to move forward on these response plans [for Poland and the Baltics] and it can’t be held up by their own particular concerns.

“Alliance unity, alliance readiness, means that you focus on the bigger issues—the bigger issue being the readiness of the [Nato] alliance. And not everybody’s willing to sign up to their [Turkey’s] agenda. Not everybody sees the threats that they see.”

Macron—who to Turkey’s annoyance has hosted political leaders of the Syrian YPD in Paris, where he praised them for the sacrifices they made to defeat Islamic State—also during December 3 repeatedly warned that Islamic State was making a comeback in Syria because of the Turkish invasion since it had weakened the mainly Kurdish Syrian Defence Forces (SDF), including the YPD fighters.

He also asked how it was possible for Turkey to be a Nato member but at the same time purchase Russian S-400 advanced air defence systems that are incompatible with the bloc’s military hardware. “Technically it is not possible,” he said.

The US has stopped any deliveries of F-35 fighter jets to Turkey because it fears its acquired S-400s could expose their capabilities to Russian military intelligence. Pressed by a reporter in London on whether the US was going to sanction Turkey for buying the S-400s as the US Congress is demanding, Trump said he was looking at the matter.

He then claimed, incorrectly, that Turkey was forced to turn to the S-400s because his predecessor Barack Obama refused to let Turkey buy the US Patriot defence system. In fact the Obama administration repeatedly offered the weapon to Turkey but Erdogan refused it because the deal didn’t include sufficient technology transfers in his eyes.

The European Bank for Reconstruction and Development (EBRD) has agreed to provide a $21.25mn senior unsecured loan to National Bank of Kuwait Egypt (NBKE) from a total $25mn loan package to support ... more

The EBRD, the OPEC Fund for International Development, the African Development Bank (AfDB), the Green Climate Fund (GCF) and Arab Bank have signed a $114mn financing package with ACWA Power to build ... more