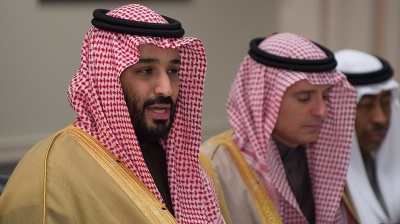 Mohammad bin Salman (left) seen at a meeting in the Pentagon.
By bne IntelliNews June 19, 2019

Turkey on June 19 strongly endorsed the UN's recommendations regarding the murder of Saudi journalist Jamal Khashoggi made in a report compiled by a UN rights investigator. The 100-page analysis contends that there is credible evidence that Saudi Crown Prince Mohammad bin Salman and some of his senior officials are liable for the killing and should be investigated over the murder.

Agnes Callamard, the UN’s special rapporteur on extrajudicial executions, said the death of the journalist and Riyadh critic in the Saudi consulate in Istanbul last October was “an international crime”.

“It is the conclusion of the special rapporteur that Mr Khashoggi has been the victim of a deliberate, premeditated execution, an extrajudicial killing for which the state of Saudi Arabia is responsible under international human rights law,” she stated.

Saudi Arabia has dismissed the report. Its minister of state for foreign affairs, Adel al-Jubeir, tweeted that it was “nothing new … the report of the rapporteur in the human rights council contains clear contradictions and baseless allegations”.

The Saudis maintain that the crown prince was not made aware of the plans of the “rogue” Saudi agents who journeyed to Istanbul and killed 59-year-old Khashoggi, a contributor to The Washington Post who was living in the US and entered the consulate to obtain papers required to enable him to marry his fiancee.

The fresh developments will do nothing to ease the fraught bilateral relations between Ankara and Riyadh. The Turks have cut the Saudis little slack over the scandal, a stance that has triggered some campaigns in Saudi Arabia for the boycotting of Turkish products, including coffee. Turkish contractors in Saudi Arabia have complained of facing extra red tape since the Khashoggi affair hit the headlines.

Using recordings of conversations from inside the Istanbul consulate where Khashoggi was killed, Callamard's report pieces together his last moments. It reveals how he was confronted by Saudi officials in the consulate, one of whom said: “We are coming to get you.”

According to the report, when Khashoggi refused to cooperate, a struggle can be heard, including heavy panting. One report conclusion states: “Assessments of the recordings by intelligence officers in Turkey and other countries suggest that Mr Khashoggi could have been injected with a sedative and then suffocated using a plastic bag.”

The report highlights how critics of the kingdom are deliberately targeted. It comes following a number of claims that Saudi Arabia has been using sophisticated surveillance spyware to hack the phones of journalists and academics. UK daily The Guardian reported on June 19 that it has been warned that its journalists have been targeted by a hacking unit inside Saudi Arabia. The newspaper said that despite repeated requests to the Saudi authorities to address the claims, and to provide reassurances that no such operation is under way, the kingdom refused to do so.

Callamard's report also said that the Saudis’ own investigation into the murder was not conducted in good faith, and might amount to obstructing justice. The report demands that the trial of 11 suspects in Saudi Arabia be suspended amid concerns about secrecy over the proceedings and lack of credibility.

“Some eight months after the execution of Mr Khashoggi, the determination and assignment of individual responsibilities remain clouded in secrecy and lack of due process,” the report summarised.

“The special rapporteur obtained information regarding a financial package offered to the children of Mr Jamal Khashoggi but it is questionable whether such a package amounts to compensation under international human rights law.”

US President Donald Trump has authorised the American military to respond to the March 11 rocket attack in Iraq that killed two US troops and one British service member. The order came on March 12 ... more

Two American personnel and one from the UK were killed and about a dozen people were wounded when 15 small rockets hit Iraq’s Taji military camp north of Baghdad on March 11, two US officials told ... more