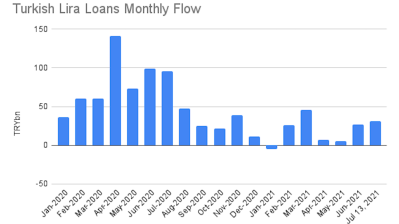 The law became effective on July 14, 2019 for a two-year period, with Erdogan given the right to extend it by two years.

Based on the law, a Financial Restructuring Framework Agreement was approved by the banking watchdog BDDK in September 2018. It was signed by 28 banks as of December 2018.

According to the Framework Agreement, if creditors covering two-thirds of a syndicated loan agree to sign a contract with the debtor within the scope of the agreement, then all of the creditors are obliged to restructure the entire loan.

The banking association provides monthly data on restructurings under the agreement. Accordingly, Turkish lira (TRY) 56bn worth of loans were restructured for a total of 230 companies from October 2019 to end-May 2021.

TBB also separately obtains data from banks on debt restructurings that are not under the scope of the framework agreement.

However, the association notes that the figure does not reflect the real volume of restructurings since meeting its request is not obligatory and banks do not provide complete data.

Accordingly, TBB members reported that they had restructured an additional TRY216bn worth of loans as of end-March 2021.

In May, Istanbul Airport operator IGA signed a debt restructuring agreement with local banks on €5.8bn of loans.

In June, BDDK extended its regulatory forbearance measures for local banks until end-September.

In December, forbearance measures for “zombie” companies were also extended, with the new deadline set at end-2021. Accordingly, companies that should apply for bankruptcy are not required to do so.

The forbearance measures make it impossible to track the actual situation that exists as regards Turkey's banking industry and its lending to the real sector.

“Let’s be realistic. There are [sunk] loans that we keep afloat,” Huseyin Aydin stated in February during the last televised interview he gave while he was still head of Turkey’s banking association, TBB.

Since 2016, Turkey's banks have felt the heat amid economic fluctuations and government pressure. The expansion of the state's Credit Guarantee Fund (KGF) led to a substantial amount of inadvisable lending.

The banks’ problems intensified after the August 2018 lira crash. In response to that crisis, forbearance measures brought in to help make up bank balance sheets were stepped up.

With the arrival of the coronavirus (COVID-19) pandemic, the problems of the Turkish banking industry are somewhat out of control.

Forbearance measures allow the country's banks to record a loan as a non-performing loan (NPL) after a 180-day delay rather than a 90-day delay.

At end-March, the Turkish banking industry’s problem loans percentage was estimated at around 15% of total loans.

The Turkish authorities do not provide actual data sets on problem loans, loans taken out under the KGF or restructured loans.

A curious reality is that the government-run banks boosted their loan books in 2020, yet they have the lowest NPL ratios.