TURKEY INSIGHT: Albayrak proclaims “soft landing” and sunlit uplands ahead, but it doesn’t add up 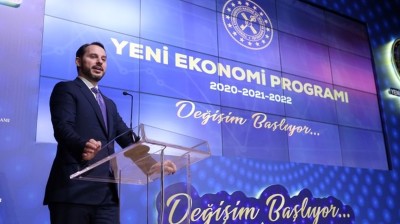 He's back in the ring with his trademark PowerPoint slideshow. Albayrak seen on September 30.
By Akin Nazli in Belgrade September 30, 2019

The presentation portrayed Turkey bouncing back from the currency-crisis induced bitter recession it endured earlier this year to in 2020 record impressive growth, restrained inflation and fiscal and current account metrics that would have observers concluding that all’s rosy in the garden.

“High growth, low inflation, small fiscal deficit and small current account deficit. How is all this possible?” Timothy Ash of BlueBay Asset Management responded in a note to investors, adding: “…Erdogan to go back to the old script of it’s the economy stupid…”

The growth and deficit numbers “don’t seem consistent [or] coherent” without, for instance, an unexpected drop in the price of oil, which Turkey entirely imports, Ash added. His highly critical comments are noteworthy as he has lately been bestowing some praise on Erdogan and Albayrak, the president’s son-in-law.

Albayrak’s updated economy programme for 2020-2022 arrives with the trajectories of the Turkish lira (TRY) and Turkey’s assets presently outperforming all peers aided by policy stimulus and favourable global market conditions. Presenting his updated outlook, Albayrak proclaimed Turkey has achieved a “soft landing”, but the IMF was in town last week for an annual review of the Turkish economy and it wasn't slow out of the blocks in concluding that when it comes to local financial markets “the current calm appears fragile”. With Turkey again set to rely on a credit-fuelled drive for growth, “prospects for strong, sustainable, medium-term growth look challenging without further reforms”, the Fund asserted.

But blithe or not, Albayrak trotted out his latest economic targets. According to the new economic programme, Turkey will grow 0.5% y/y in 2019, down from the 3.5% predicted in the previous programme covering 2019-2021 released last September, but “beating all doubters expecting a contraction again”, Albayrak said, repeating a favourite line. In 2020, he said Turkey was set to grow by 5% y/y, as Erdogan recently outlined, up from the 3.5% foreseen in the previous programme.

The latest programme also anticipates that consumer price index (CPI) annual inflation will be down to 12% at end-2019, a significantly better figure than the 16.3% given in the previous programme.

The latest official data suggests that CPI inflation fell to 15.01% in August. It will fall into the single digits in September and October due to the base affect from last year when it was sent soaring by the balance of payments crisis.

These amount to another set of impressive figures. But as the consulting firms hired by Albayrak should have told him, the outlook doesn’t really add up. Albayrak may have stated that his new buzzword is “change”, following “rebalancing” which he settled on for this year, But if you find yourself up stinky creek, you’d better be honest about the merits of your paddle.

Obviously, there are ‘Erdoganomics’ at work here, and, who knows, there will be a day on which orthodox economists everywhere will be required to eat a mountain of humble pie as all that the president and his officials have foretold comes to pass. The TRY was up around 0.4% against the dollar as the markets digested Albayrak’s latest plan, released on the closing day for Q3 financials.

The finance minister’s presentation followed a mystifying sudden inflow into Turkish banking stocks on the afternoon of September 27. Perhaps it is time for profit realisation in Turkish assets before investors sail to new harbours. Market discussions pondered what was driving the out-of-the-blue interest in Turkish lenders amid the growing government pressure on local banks to lend. Is there some insider news doing the rounds, or is this perhaps a speculative hit-and-run as happened at the beginning of the year before a bad ending prior to the March 31 local elections?

The banking regulator’s decision to force local banks to reclassify TRY46bn of loans as non-performing will raise concerns about the health of the lenders’ loans books, but the major risks in the banking sector stem from large external debts, deposit dollarisation and the growing prevalence of state bank lending, Jason Tuvey of Capital Economics said on September 20, one week before the jump in the Borsa Istanbul banking index, in a research note entitled “Turkey’s banks back in the spotlight”.

Perhaps more than half of the loans that banks have been told to reclassify were made to the construction and energy sectors.

“The reclassification of loans adds to the evidence of the hit to the economy from last year’s currency crisis. It will also add to fears that banks are painting a rosy picture of their loan books. But we estimate that it would take a much larger rise in the NPL ratio to around 15% [up from the estimated official figure of 6.3% after adding the latest TRY46bn] to trigger a need for recapitalisations,” Tuvey also said.

He added: “There are a few other risks in the banking sector that should receive greater attention. The first is that banks’ low levels of liquid FX assets means that they are in a poor position to cope with a fresh jump in wholesale borrowing costs. Second, rising deposit dollarisation exacerbates currency mismatches on banks’ balance sheets and leaves banks vulnerable to a withdrawal of FX deposits. And third, the growing politicisation of lending is likely to result in a misallocation of resources and a sharper rise in non-performing loans further down the line.”

Some market observers have indeed again been seeing signs of recovery in the Turkish economy, but no-one should be convinced that any kind of recovery is at hand before getting through the upcoming winter. The Turks themselves keep buying dollars and scarce jam jar lids as they conserve fruit and vegetables in preparation for hard times.