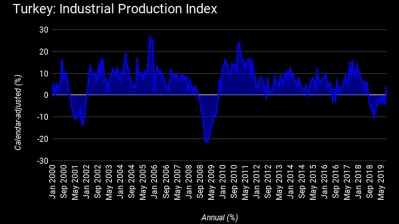 Turkey’s official calendar-adjusted industrial production index recorded growth of 3.4% y/y in September. The gain, announced by statistical institute TUIK on November 14, is the first annual rise seen since August 2018 when the Turkish economy was hit by a currency crash.

The Bloomberg market consensus forecast was for 3.3% y/y while the median estimate in a Reuters poll of six economists was for an expansion of 3.55% y/y, with forecasts ranging between an expansion of 1% and 4.3%

Another bigger-than-expected rate cut, on top of the easing of 1,000 bp in all that the central bank under new management has brought in since July, appears likely to be introduced on December 12 following the last monetary policy meeting of the year.

The Turkish economy, meanwhile, is likely to record growth rates of 5-6% y/y in Q4 and Q1 2020, Jason Tuvey of Capital Economics said in a research note.

These growth rates will come as another shock for the many Turks who, living amid the embattled real economy, are already puzzling over how officials claim there is now single-digit inflation.

The sceptics who have challenged the veracity of the TUIK’s number crunching—questions have been put down in parliament by the opposition—will again be poring over its survey-based indicators, while those taking a long hard look at suggested manipulations undertaken by the central bank continue trying to identify the national lender’s real reserve figures—they should simply be based on hard account books, unlike the survey-based plus calendar-adjusted industrial production index.

The base effect caused by the contrast against extreme figures brought on by the summer 2018 lira crisis has since September been providing the TUIK with the plain logic to explain its release of a single-digit inflation rate and positive annual growth rates. The foreign trade figures, on the contrary, are deteriorating due to the base effect coupled with the renewed loan stimuli driven by Erdogan administration officials attempting to re-inflate the economy at the double.

Coupled with the slowdown in export growth, it brought about an expansion of the trade deficit to 6.6% y/y in September and 256% y/y in October, following the start of the deficit widening, with annual growth of 1.9%, posted in August.

“Import compression is over and that's been a key driver of current account adjustment...,” Robin Brooks of the Institute of International Finance (IIF) said on November 14 in a tweet.

“The Turkish authorities are taking steps to turbo-charge the economy. Alongside interest rate cuts, fiscal policy has continued to be loosened and state banks have ramped up lending,” Capital Economics observed on October 29 in a note entitled “Rate cuts fuel rally in Russian & Turkish bonds”.

“On past form, the recent pick-up in credit growth is consistent with a renewed deterioration in the current account. If sustained, this is likely to cause the lira to come under pressure and the central bank will probably bring its easing cycle to a halt,” Capital’s Tuvey observed on November 12 in a research note entitled “Turkey: credit recovery has some legs, but brings risks”.

It should be observed that the mainstream research reports are not registering how the lira used to be subject to a floating exchange rate regime, but is now subject to a ‘dirty float’ thanks to market manipulations deployed by officials. Also, let’s not forget how Finance Minister Berat Albayrak, who is President Erdogan’s son-in-law, fired the TUIK deputy head responsible for the inflation figures on the day he announced annual inflation hit 25% y/y in September 2018.

Based on the official figures, Turkey will grow faster than widely anticipated and inflation will not escalate as much as expected, even if the base effect reverses polarity in November.

Turkey’s official economic performance will continue to turn established economic theory on its head, with the lira remaining stable amid a growing current account deficit, booming lending and a widening budget deficit.

“One big takeout from [my Turkey] trip this week was that almost no one outside official circles believes the inflation data. I mean headline has dropped miraculously from 25% this time last year to 8.5% now. The PPI drop is even more striking from 45% to mid-single digits,” Timothy Ash of Bluebay Asset Management said on November 7 in an emailed note to investors.

“Striking” certainly is the word. It’s striking how wretched Turkish consumers and business people feel out there when the officials doing the bidding of the strongman at the helm are telling them just how rapidly things are improving.

“Erdogan has gone for the tried and tested route of trying to engineer lower headline inflation and a stable currency (by killing and manipulating markets) to allow policy rate cuts to spur investment, growth and jobs—actually in his mantra interest rate cuts are forcing inflation lower. But therein this might not be enough. I don’t think people care whether real GDP growth is 3% or 5% [the Erdogan target for 2020]—it’s hard to feel the difference. But they feel inflation of 10-20% to their great annoyance and it does not help that the authorities are telling them they are wrong and it is half this level,” Ash added.

ING: Russia balance of payments: supportive of ruble in the near-term, but risks for 2H21 mount.
4 days ago
ING: Growth in the Balkans: from zero to hero again?
10 days ago
FPRI BMB Ukraine: Most Ukrainians are optimistic about 2021 – poll
11 days ago
COMMENT: Record high debt levels will slow post-coronavirus recovery, threaten some countries' financial stability, says IIF
13 days ago
COMMENT: The Manafort Pardon: a finger in the collective eyes of Ukrainians
19 days ago