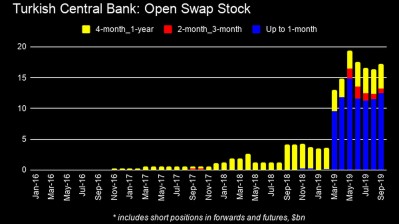 The overall limit of a swap agreement signed in August last year by the central banks of Turkey and Qatar has been raised from $3bn Turkish lira- and Qatari riyal-equivalent to $5bn equivalent to the Turkish and Qatari currencies. An amendment delivering the increase was signed on November 25 in a ceremony held in the Qatari capital Doha, the Turkish central bank said on November 26.

Turkish President Recep Tayyip Erdogan was on November 25 in Qatar on a one-day visit. On November 26, he called on Turks to “leave the dollar” and convert their foreign currencies into Turkish lira (TRY) in order to boost Turkey’s currency and show “patriotism”.

It’s been quite a long while since Erdogan last called on Turks to sell their dollars. Meanwhile, Turks, along with foreigners who can access TRY, have been enjoying “discounted USD sales” in exchange for Turkish lira via public lenders.

Recently, the Erdogan administration obtained $2.5bn from 5-year eurobonds, but $1.5bn of this has already been repaid to redeem a previous issue.

Turkey’s Mersin International Port (MIP) lately raised $600mn from a eurobond sale, but $450mn was earmarked for the redemption of a paper maturing in August 2020, something of a long horizon for Turkish policymakers.

Also, inflows from the European Bank of Reconstruction and Development (EBRD), which has been invested in Turkey for a decade, have slowed significantly this year, while the local lenders have been net external debt payers. The EBRD is clearly getting unsettled in the face of the Turkish strongman’s open defiance of norms—the recent imposition of a felon as head of the Istanbul stock exchange did not go down well with the development bankers who have a stake in the bourse.

The real sector in the meantime has weighed on short-term trade credits to meet FX financing needs.

FDI inflows are also unpromising, despite the currency collapse and undeclared bankruptcies that might be expected to produce more cheap company buys and market entries for foreigners venturing into Turkey. One project Erdogan has taken a particular interest in—securing for Turkey a new Volkswagen car plant costing more than $1.2bn—is looking less and less likely to materialise, given the opposition from the German “Volk”, angered by Turkey’s incursion into northeast Syria and reports of human rights atrocities that followed.

The cyclical difficulty for the Turkish economy caused by the end of the tourism season is bringing the string of current account surpluses to an end—it is coinciding with the latest government-backed loan growth causing the end of import compression. The big squeeze was caused by the rebalancing that took place in the wake of the summer 2018 lira crisis that sent import prices skywards and, let’s not forget, caused severe economic pain for ordinary Turks. The three family collective ‘cyanide’ suicides that Turkey lately experienced in less than two weeks were attributed to hardship. Rather than talk about the economic mismanagement that led up to such tragedies, officials instead have sought to blame the easy availability of cyanide.

How quickly flows of credit let loose by the opening of the loan taps will reach those at the bottom of the social pyramid is in question. Well, at least ‘Robin Hood’ has turned up in Istanbul, wiping out grocery store debts in poor neighbourhoods, but he’s going to need one huge bunch of merry men if he’s to make a dent in Turkey’s problems.

Istanbul mayor Ekrem Imamoglu at the weekend said he has obtained a €110mn loan from Deutsche Bank, but it is unclear whether that money will arrive in Turkey. It could instead detour directly to foreign suppliers building metro lines. Imamoglu, complaining that Turkish state banks have shut out the Istanbul municipality since his victory over Erdogan’s candidate in the business and cultural capital’s June revote, also confirmed he is seeking Treasury approval to sell eurobonds.

Where Turkey’s concerned, there’s been no discernible change in attitudes to external borrowing by successive administrations since the 1950s, though the financiers may vary. It appears that Erdogan’s former financiers may be getting ready to finance Imamoglu—a charismatic opposition figure who, having won the iconic Istanbul mayorship, could feasibly ascend to the presidency if events play his way—but the problem for the upcoming politician is that the era of slick global financiers may be coming to an end.

Many observers are agog at what they see as the tragic farce of American plutocrat Michael Bloomberg attempting to save the three-decade-old playing fields of the global finance industry from populism’s “patriots”, namely Trumpers, Erdoganists, Johnsons, Orbanists et al.

Power corrodes the holders of power as they lose touch with reality due to the a**-lickers all around them. Only days after former Republican Bloomberg seriously (quite seriously!) announced his bid to become the 2020 presidential candidate for the Democrats, his financial news mammoth published a story mocking a pothead street culture activist who, concerned by New Jersey’s latest neoliberal attempt to legalise and homogenise adult recreational use of marijuana, “Says Rich Will Crush N.J.’s Black Market”.

However, back to Turkey, and we can say that the global finance industry is close to a win with Imamoglu. If only elections can be held, he can overcome Erdoganomics.

Although Erdogan still has the ability to access some financial lifelines, including various unidentified inflows, the likelihood of him curing his capital inflows headache does not seem to be on the horizon.

The Turkish central bank has borne the $3bn Qatari swap since September last year under its “short positions in forwards and futures in foreign currencies vis-à-vis the domestic currency (including the forward leg of currency swaps) with maturities more than 3-months and up to 1 year” account.

Following a $1bn swap deal with China agreed in June, prior to the Istanbul slap in the face for Erdogan, the central bank had $4bn in this account by September, according to its latest data.

Shorter term positions in currency swaps remain a mystery. There are unanswered inconsistencies on the central bank’s balance sheets, while some retroactive revisions employed in the “International Reserves/Foreign Currency Liquidity” data in response to ‘friendly’ warnings have made it even harder to chase up Turkey’s monetary policy quacks and quackeries.