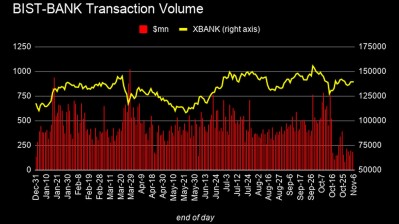 VTB Capital is pushing the line that November will bring a 10%+ Borsa Istanbul recovery, with particular gains in bank stocks. It is forecasting the growth contingent on no re-emergence of geopolitical risk factors, Akin Tuzun of the Russian investment bank said on November 5 in his latest Turkish Equities Monitor, entitled “Rerating reloading...”.

Well, when it comes to Turkey’s stock exchange and the disguise thrown up around the parlous state of the Turkish economy, we mere mortals are quite clear that any big advance on the bourse will have absolutely nothing to do with the fundamentals. Equity analysts should please not bother us with any observations about falling inflation and sinking interest rates. Fixed income investors have not even bought into the certain pledge of arbitrage on the aggressive easing brought in by the central bank following the usual crude signalling from monetary boss and Turkish president Recep Tayyip Erdogan.

VTB’s Tuzun, however, unlike City of London bull joyriders who send out a Buy report each time the Borsa Istanbul tests its peaks, is generally timely when it comes to the basic rule of trade: Buy cheap, sell expensive.

9% drop
Erdogan’s Syria adventure resulted in a 9% drop in dollar terms on the MSCI Turkey index in October. Risk also grew as a Manhattan federal court found itself treated to the unsealing of ‘The US vs. Halkbank’ indictment, an Iran sanctions-busting case it appears Erdogan thought might have gone away (how much or how little the Trump administration knew about this move by the attorney general of the Southern District of New York is still open to question). As things stand, it presently seems that the Turkish leader will manage to stall, at least for one month more, sanctions salvoes from the US establishment thanks to his man in the White House who only listens to said establishment when he thinks it behoves him to do so.

Despite reports that he may call the trip off, the view from here is that according to the current lay of the land Erdogan will definitely be in Washington, DC on November 13. He needs to seem like he’s coquettish after he binned Donald Trump’s bizarre leaked Syria ultimatum letter in mid-October, and he would never miss a photo opportunity in the White House.

Meanwhile, Julian Rimmer of Investec, on November 5 in a note to investors continued to weigh up what kind of quid pro quos exist between Erdogan and Trump, writing: “When you're trying to find something, it helps if you know where to look. There is a school of thought that since [Islamic State leader Abu Bakr al-Baghdadi, killed in a US special forces operation on October 27] was… in Idlib [in Syria] just 5km from the Turkish border, the Turks knew exactly where [he] was 'hiding' and it was with their tacit consent. [Erdogan] used the [Islamic State leader] as leverage over [Trump] when requesting the US withdrawal from Northern Syria and permission to invade and engage in some genocidal Kurd-bashing.”

“It is partly as a result of this that Turkey has a Stable Outlook (Fitch's opinion) and the lower primate in the White House is a Stable Genius (his opinion),” he added.

Laughed out of court
Back on the Halkbank front, at the second hearing of the case held on November 5, the Turkish state bank’s attorney, Andrew Hruska of King & Spalding, appears to have been more or less laughed out of court, according to this account from Courthouse News. Hruska reportedly requested a “special” appearance to seek the dismissal of the case against Halkbank on the grounds of jurisdiction, stating that his client would not recognise the US proceedings.

The result of Hruska’s application was still awaited as this article went to press, but anyway the path the American judiciary is on under Trump’s rule is quite clear.

“This case… long since ceased to contain any judicial dimension and instead became, like most, entirely political,” Rimmer added in his note.

Rimmer’s bet is that the Americans will not withdraw the case against Halkbank but will instead continue to use it as a bargaining tool. Turkey, then, despite one local broker on November 5 morning telling Rimmer that the “geopolitical tension is over”, is anything but stable.

“When a country's ruler resembles King Lear out on a moor in the storm, any calm is temporary and deceptive because the minute his domestic fortunes start ebbing, he will promptly revert to using foreign policy as a means of drumming up support. Investors should be on their guard against suspect economic data from [Turkish official statistical institute] TUIK and the depth and breadth of any economic recovery. Locals still have hard FX savings at record highs and the Saudi determination to boost oil pricing before Aramco's listing will exacerbate the rising trend in inflation, already deteriorating on base effect in Nov and Dec,” Rimmer also observed.

Okay, we all know that Erdogan is in the long run on an arc of tragedy that Shakespeare’s quill would have had no problem sketching four centuries back, but does that mean that he is not able to offer another hit-and-run opportunity in November?

Houston, before we buy it, we have another problem.

Unofficial suspension of markets
In response to the Halkbank indictment, Erdogan introduced a ban on short-selling along with a depositary rule on leading bank stocks. A fresh Turkish lira liquidity shutdown on the London offshore swap market was employed by officials on October 9 when the military offensive was launched. And that has meant an unofficial suspension of Turkish markets.

The depositary rule was later lifted and lira liquidity smoothed out in London but the short-selling ban on Turkey’s top bank stocks remained in effect as of November 6. Ending it would help the market normalise and be a positive, in VTB’s view. There’s no argument that it would be a positive for equity lovers but if the rule goes, should we pile in? The hit-and-run seems there, but there are unknown unknowns at play, Turkey’s markets are treacherous.

Also due to the ban on shorts, transaction volumes in bank shares are still dipping. However, lower volumes do provide better territory for the hit-and-run brigade.

On the afternoon of September 27, a sudden and certainly unexplainable inflow of about $150mn into Turkish banking stocks moved the banking index up by 8% and the benchmark BIST-100 by 5% in an hour prior to the weekly market close.

So, the raiders can trigger a sharp banking stocks movement with a relatively smaller inflow but the weak side here is that most of the ‘algos’ are not working due to the short-selling ban and there are not that many players to pull the trigger on the buy side with a sudden impulse.

But folks! This is simply an equity wrap-up that we regularly put out. We do our best, but whether you want to spend your sinner’s vacation at Erdogan’s stock exchange or in Las Vegas is up to you!

You’ve missed the story
What’s more, while you’ve been busy getting this far into our commentary to stay up to date with Turkish equities, you’ve missed the real November 6 financial markets story from Turkey: the Turkish Treasury has announced in a written statement that it “has mandated Goldman Sachs, HSBC, and JP Morgan for the issuance of a Dollar denominated bond due 2024”.

Fortunately, we had a piece on November 5 questioning the current situation as regards Erdogan’s access to the international debt markets in the wake of the Syria uproar with Turkey all set to redeem $1.5bn on November 7 in 5-year eurobonds.

Sure, it was just some romantic reverie. Public relations is one thing. Business is different.

Also on November 5, following the market close, Erdogan’s favourite private lender, Isbank (the president regularly chucks brickbats at it for its connections to the opposition), said in a stock exchange filing that it has become the latest Turkish bank to roll over a syndicated loan.