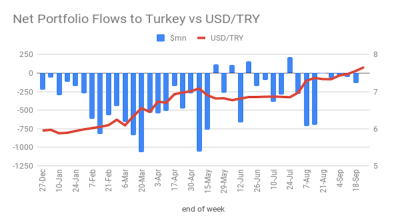 Turkish banking regulator BDDK has relaxed local banks’ foreign-exchange swap, forward and option transaction limits with foreign entities to 10% of equity from 1%, it said on September 25.

In April, amid the first wave peak of the coronavirus (COVID-19) crisis, the BDDK cut the limit to 1%, meaning de facto there could be no additional swaps with foreign entities.

In its latest statement released on September 25, the BDDK also increased the amount of lira sell side foreign exchange swaps, forwards and other derivatives made with non-residents with a maturity of seven days to 2% of banks' equity from 1%.

The move followed the surprise 200bp policy rate hike on September 24, while September 25 saw the central bank hike its lira rate at USD-TRY swap auctions with domestic banks to 10.25%, in line with the new main policy rate. It was moved up from 9.75%.

On August 21, amid lira troubles, the central bank hiked the swap rate to 9.75% from 8.25%, the previous main funding rate that remained idle from the start of August to September 25 as the regulator sought to tighten monetary policy to stop lira depreciation.

Also on September 25, the central bank provided only Turkish lira (TRY) 5bn in its main funding channel, the one-week repo, in a move that pushed local banks to the overnight borrowing window at 11.75%.

The authority, moreover, did not open a traditional repo auction. The latest rate for such an auction was the 11.59% seen on September 24.

A banker told Reuters on September 25, following the repo auction moves, that he expected a slight rise in the average cost of funding, which stood at 10.69% on September 24, towards 11%.

Some investors were concerned that any signs that policymakers were returning back to the main funding channel would effectively turn the rate hike into a cut, Bloomberg noted on September 25 in a story entitled “Turkey Tightens Monetary Policy Further After Surprise Rate Hike”.

Some investors remained wary that the tightening brought in on September 25 was only temporary, according to Bloomberg.

If policymakers return to offering much higher amounts through the benchmark one-week repo auctions in the days ahead, the weighted average cost of funding could start dropping from current levels, it noted.

"It all depends on the day-to-day funding conditions that they will implement going forward. Even if it is a case of real tightening, how long will it last for? We have no guarantee that the Turkish central bank won’t start reverting to repo funding as soon as the lira enters a more stable path toward appreciation," Cristian Maggio of TD Securities, a long-time lira bear since at least 2018, told Bloomberg.

It is clear that neither an even sharper and real shock rate hike nor some hot money inflows will offer any solutions to the ongoing collapse of the Turkish economy on all fronts.

The lira bears of recent years have always been proven right but they have missed some stunning returns during synthetic relief cycles.

It seems that what is truly going on—starting last week with Ankara’s U-turn away from escalating the row with Greece and Cyprus over rights to explore for gas in certain maritime territories—may be an attempt by the Turkish government to turn policy around to the point that it can trigger some flows of hot money.

Hot money of course is not interested in longer-term realities but in short-term hit-and-runs. And turning to hot money is another sign of how desperate the Turkish government is at the moment.

Moreover, if the Erdogan administration manages to launch a new hot money cycle, it should be observed that the cycle that follows the last is always shorter and more damaging.

Meanwhile, the markets are currently in limbo as the hot money bulls and the sceptics mark out their ground.

When it comes to the Turkish markets, one should never forget the impact of the government’s invisible hand in supporting campaigns such as the recent so-called Black Sea natural gas discovery that the true experts have pointed out could eventually be shown to be hardly a discovery at all and the surprise rate hike that could turn out to be no such thing.

The two sharp moves on the USD/TRY chart in the past two days—the first coming just after the confounding rate increase announcement and the second during low liquidity morning hours of September 25—reek of the strategy pursued by the “native and national FX teams” working at government-run banks.

Market-making news services and the returning hungry hot money brigade seem to be coalition in saying that Turkey’s moves, since the afternoon of September 24, are extremely positive and show a certain commitment that should be seen in upcoming steps.

Deutsche Bank called the hike a "game changer" for Turkey, while fund manager BlueBay Asset Management said the loosening of the domestic banks' FX limits offered hope that the authorities "finally get it" that tight restrictions are counter-productive, Reuters reported on September 25.

On the other hand, Tatha Ghose of Commerzbank, told Reuters separately: “Investors are mainly interested in whether or not [the interest rate hike] can break the depreciation momentum which the lira had picked up over the past month.”

In the coming period, whether and how much hot money will return to Turkey will be closely watched.

The latest campaign has, of course, a Borsa Istanbul leg. bne IntelliNews will have a separate story looking at what is going on at the Turkish casino. Watch this space.

BEYOND THE BOSPORUS: Erdogan fires his Russian missiles into a fog of confusion

Top international bond fund blacklists Russia and peers for poor ESG scores
Poland’s core inflation bounces back up to 4.3% y/y in September
BEYOND THE BOSPORUS: Erdogan fires his Russian missiles into a fog of confusion