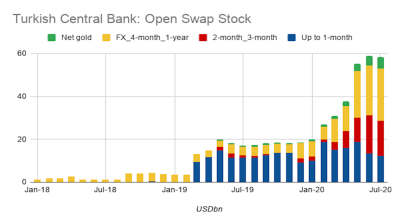 The Turkish central bank’s open FX and gold swap stock slightly declined to $58.2bn at end-July from $58.9bn at end-June, lagged data from the authority showed on August 28.

According to calculations based on the data, Turkey burnt through $12bn of international reserves in July to fix the USD/TRY at 6.85, Kerim Rota, a former banker, told local daily Karar on August 29.

That brought the total loss of reserves since the beginning of 2019 to $104bn.

It should be noted that these figures are calculated over discrepancies in the central bank’s balance sheet and different sources may reach different conclusions. However, it is certain that around $105bn worth of international reserves are no longer in place.

"Unidentified net changes in Turkish central bank reserves (backdoor interventions in the USD/TRY market)". Calculations by Haluk Burumcekci of Burumcekci Consulting, chart by @e507. Burumcekci may on August 31 release his calculations on the July data in his daily bulletin.

Rota has suggested that the state banks’ short position of $12bn of FX as of end-July should also be taken into account when calculating overall interventions in the USD/TRY market, bringing the total to $116bn.

The state lenders’ FX position is another mystery as it is unknown how much FX-denominated domestic government bonds have been used to limit their deficit.

From November 2019 to June this year, the central bank’s open FX and gold swap stock increased in each of the eight months, with the highest monthly jump, totalling $18bn, recorded in May.

Since the lira was hit by the coronavirus (COVID-19) crisis, the central bank has gradually cut Turkish lenders’ swap limits with their foreign counterparts to 1% of their equity, which de facto means no new swaps.

So, it seems the government may not make a move on the local lenders’ remaining swap stock with foreigners.

According to calculations by @VeFinans, Turkish banks’ USD/TRY swap stock with foreign counterparts declined to $7.6bn at end-July from over $50bn prior to the August 2018 lira crash, around $45bn prior to Turkish President Recep Tayyip Erdogan’s charging at windmills ahead of the local polls at the end of March 2019 and over $30bn prior to the COVID-19 sudden stop shock in global financial flows.

These three dates in question (the August 2018 currency crash, the March 2019 local polls, the coronavirus crisis) mark, on the chart above, the times when the Turkish government deployed interventions to stop lira leakage to London with the aim of preventing the ‘Londoners’ shorting the lira.

Moreover, it seems that there is no additional FX liquidity in the local banks.

Fitch Ratings said on August 22, when it downgraded Turkey’s sovereign outlook on its three-notch junk rating, that Turkish banks needed to refinance at least $35-40bn “when more stable sources of funding are excluded” over the next 12 months as of end-June while they had foreign-currency liquidity of $75bn at end-June, of which Fitch estimated 54% was swaps largely undertaken with the central bank.

Fitch’s calculations suggest that the banks only just have enough money, when swaps with the central bank are subtracted, to repay their must-have debts.

This may also explain why the state banks shorted dollars in July.

It should be observed that Fitch believes the Turkish banks’ $31bn worth of required reserves at the central bank as of end-July ($25bn at end-June) remain secure.

Since the beginning of August, the central bank has been increasing reserve requirement ratios for local lenders. The Turkish market community has discussed whether the authority is demanding that banks find fresh hard currency rather than shifting their swaps to required reserves.

It seems clear what the central bank really wants but no major foreign financing deals or capital injections were announced in August by bank shareholders.

According to the latest central bank data on the international investment position, Turkey’s banking system recorded $40bn of hard currency in addition to $47bn at the central bank.

Banking watchdog BDDK’s latest weekly bulletin shows the banking system as having $6.7bn in FX cash, $10.6bn placed with foreign banks and $26.1bn in eurobonds as of August 21.

When added up, it may stand comfortably above $40bn but then please check on the table below for how Turkish banks are carrying $55bn of FX-denominated papers, of which only $26bn of eurobonds are internationally recognised, or at least should be recognised despite Turkish deep-junk ratings, and the use of $41bn of the papers in repo transactions or as collateral.

Amid the huge short FX position that Turkey is carrying, the USD/TRY tested consecutive record highs across August while Erdogan kept up his intransigence, not wanting to hear talk of an emergency rate hike.

Murat Kubilay, a former portfolio manager, questioned on August 28 in a tweet thread whether an upcoming shock rate hike that would prove inevitable could help the lira catch its breath this time around as the current problem is not the returns that Turkey promises but the country’s ability to meet its FX liabilities.

All roads for Turkey will converge in the autumn, with the US presidential election to be held on November 4 and Turkish borrowers having to roll over chunky external debts ahead of ongoing risk items, including that election, coronavirus, geopolitical adventurism, domestic politics threatening to come to the boil and severe troubles in the real economy.

Some syndicated loans held by Turkish banks will need rolling over in October and November.

Turkey will be wishing to see the USD remain weak to limit the size of the incoming meteor, but it’s not yet known whether the Fed can keep the markets from breaking out in a cold sweat by injecting easing morphine at unprecedented levels while Donald Trump discusses the reliability of mail-in voting and whether he should leave the Oval Office even in the event of a defeat.