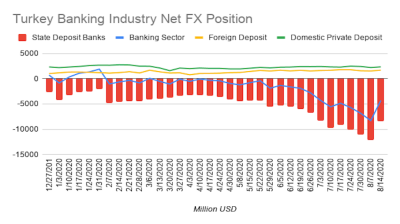 On August 15, market observer @e507 recognised that government-run deposit banks—namely Ziraat, Vakifbank and Halkbank—had bought $5bn of FX-denominated papers in the past 20 days.

Moreover, the papers were not “eurobonds” which are sold abroad on international markets, but were categorised as “other bonds”, he wrote in a tweet thread, basing his observations on regular weekly data from Turkish banking watchdog BDDK.

The papers were simultaneously recorded as collateral when they were bought by government-run banks, he also noted.

The identified cycle of “theoretical” dollar papers can be seen as completed when the government-run banks give the “USD” papers in question to the central bank as collateral.

@e507 also turned to @kerimrota, a former banker, to ask him whether this was another version of the “recirculation pump”. This works in the USD/TRY market to sell back FX-deposits swapped from local lenders to local FX-deposit holders.

Kerim Rota had referred in an April 5 op-ed for Paraanaliz to how “John Ahmet is coming to the bond market”. Ahmet is a famous Turkish inventor who claimed that he made a frictionless recirculation pump.

“With your tweets, I’ve remembered the hot summer months of 2001 [the year of a big financial crisis in Turkey] when short positions of the [banking] industry were closed with the paying of the price of FX-denominated domestic government papers in Turkish lira,” Rota responded to @e507 in a tweet.

"Share of FX in domestic borrowing on the rise": BloombergHT

The FX-denominated domestic government papers in question are “theoretical” since “those who accept them as foreign currency and add to their portfolio are limited because they are not issued according to international law”, Ugur Gurses, a former central banker, said, further explaining @e507’s arguments on August 19 in his column entitled “How ‘local dollars’ are printed by the Turkish Treasury” for Duvar English.

As a result of ongoing regulatory forbearance of a vicious cycle employed since 2016, even the credit rating agencies have lately been voicing the opinion that the balance sheet of the Turkish financial system led by the central bank, whose reserves are in question due to off-balance sheet FX swaps, far from reflects the real situation.

In May, the government announced some capital hikes at state lenders but media reports overlooked the fact that the “capital hikes” were performed by exchanging government papers among the Turkey Wealth Fund (TVF), the unemployment fund and state banks.

However, as the Turkish financial system dives deeper into the realm of financial alchemy, more and more Turks are starting to look for physical FX and gold.

Daily transactions volumes at the “Footed Bourse” in Istanbul’s Grand Bazaar jumped to $40mn from $10mn prior to the coronavirus (COVID-19) pandemic due to taxes and commission charged on FX transactions via the financial system, local business daily Dunya reported on August 25.

It should be noted that these figures are modestly estimated as the market is over-the-counter (OTC) and no records are held for most transactions.

Around 50 brokers work in the Tahtakale OTC FX market in the Bazaar, according to Dunya.

COMMENT: Ukraine’s the Old Rotten System is alive and well
4 days ago
STOLYPIN: Whatever is happening to Putin?
7 days ago
FPRI BMB Ukraine: Lawmakers’ promises, one year later
11 days ago
FPRI BMB Russia: Russian to hold elections in 83 regions
12 days ago
Turkmenistan: They call me Mr. Boombastic
12 days ago