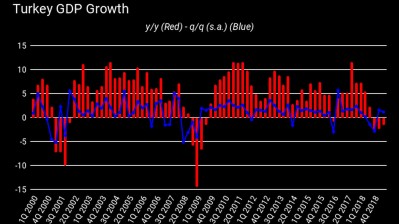 Turkey’s GDP contracted by a better-than-expected 1.5% y/y in the second quarter following the contractions seen in the previous two quarters, statistical institute TUIK said on September 2.

But, before we go on, note without further ado that TUIK has, while crunching the data, revised all past figures up until 2016 once again, making it nigh on impossible to trace the country’s true economic path. This kind of thing is all too common with Turkey's official data so rather than write "a better-than-expected" as has been written above, perhaps the trained eye would be happier with "an expected unexpected",

The median finding of a Reuters poll released last week forecast that the Q2 GDP contraction would come in at 2%.

Available Q3 data, meanwhile, possibly suggests that Turkey is set to clock up four consecutive year-on-year contractions, with the government eyeing the base effect that will emerge in the last quarter to finally lead the economy into growth territory, as long as it is not hit by a fresh economic shock before then.

But even should a new shock arrive, the government could announce an economic expansion as early as Q3 since its data is not questioned—apart from fleetingly by the opposition in parliament and, to officials' consternation, rather rudely by Germany's Commerzbank in September 2017—despite being marred by significant inconsistencies.

The TUIK’s better-than-expected GDP data for Q2 was eagerly presented as pointing to the green shoots of an economic recovery, but digging into the numbers suggested the investment collapse in Turkey continued during the quarter, even from the official perspective.

Agricultural ‘surprise’
For a surprise which to the seasoned observer is really no surprise at all, take a look at TUIK’s agricultural production data (which has been ‘surprising’ for several quarters in a row). The official picture shows growth of 3.4% y/y, with the previously released 2.5% y/y growth given for the first quarter revised down to 1.3%.

Moving over to the smokestacks, industrial production contracted for a third consecutive quarter while the debt-fuelled construction industry, once hailed as the relentless growth engine of the boomeriffic Turkish economy, shrank 13% y/y on top of the shrinkage endured in the previous three quarters.

Private consumption shrinking
Looking at the angle of expenditure, the official data suggested a slowdown in the private consumption contraction recorded for three straight quarters, with a slowing also seen in government consumption growth in the second quarter.

“The breakdown of the data showed that economic growth was heavily reliant on stronger consumer spending and ongoing fiscal stimulus,” Jason Tuvey of Capital Economics said in a research note.

With Turkey, analysts are one minute painting pinkish hues and the next dipping their brush in deep, dark watercolours, but Jon Harrison of TS Lombard told Reuters in response to the GDP release that the data “confirms that growth is not doing very well and although it is moderately better than expected ... concerns are still there about whether there will be an overshoot of monetary policy, and a renewed depreciation in the currency”.

The Erdogan administration will tell you it’s not really a big believer in zombies, though in Turkey’s tormented economy there are living dead companies all around. Such studious denial allows officials to pile on more of their trademark economy policy, namely stimulating the economy by turning on the credit taps, but such is the wretchedness out there by now that private lenders are dragging their feet over extending new loans and domestic confidence in the government is pretty much at rock bottom.

“We are tracking lending by Turkey's state banks at around TRY28bn [$4.8bn], half the Q1 credit expansion. What's different is that this lending is offset 1:1 by deleveraging among private banks, so that overall credit extension is close to flat in Q3,” Robin Brooks of the Institute of International Finance (IIF) said on Twitter.

“Turkey's GDP grew 1.2% q/q in Q2, powered by the large Q1 credit impulse that was concentrated in March, giving a big boost to Q2 activity. The credit impulse since then is either negative (Q2) or flat (Q3), so the real question is what happens to growth in H2 2019,” Brooks added in another tweet.

IHS, which compiles the data for the index in cooperation with the Istanbul Chamber of Industry, has again seen signs of recovery in Turkey’s manufacturing industry.

Nevertheless, the index remained in negative territory for the 17th straight month in August, despite rising to a “13-month high” of 48 from 46.7 in July (anything below 50 denotes a contraction).

Putting another dent in hopes for a recovery worth the official press release paper it’s written on, data from the Turkish Automotive Manufacturers Association (OSD) showed that the automaking industry’s total production declined by 12% y/y to 578,935 units in January-July.

Voices in the automotive industry have grown louder and louder in begging the government to extend special consumption tax cuts that expired at the end of June, while other industrial sectors are calling for a reversal of recent natural gas price hikes.

Also on September 2, local business daily Dunya reported that South Korean energy group Hanwha was exiting the Turkish market by selling its companies following the termination of its partnerships with Turkey’s Kalyon Group.

Belarus economy increasing well managed, but remains vulnerable to external shocks
3 days ago
TURKEY INSIGHT: With the lira through the looking glass, global finance questions whether Erdogan can sell eurobonds
4 days ago
Tajikistan: Coronavirus brings bonanza of aid, but zero accountability
5 days ago
After reopening, Armenian economy continues to struggle
6 days ago
Misery vs death
10 days ago