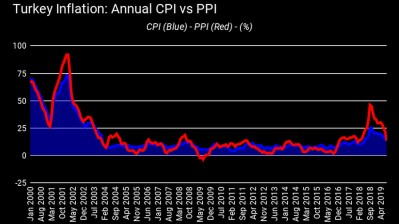 The market expectation for the August reading was for around 15.5%.

The inflation news seems likely to pave the way for another chunky rate cut from the central bank's monetary policy committee (MPC), which introduced the biggest benchmark easing for at least 17 years, amounting to 425 bp, at its last meeting. It is set to meet again on September 12.

In September and October, official inflation is set to fall further, given the base effect.

Starting from November, the base effect will reverse, but the accuracy of TUIK's inflation calculations amid Turkey's lira crisis-triggered economic strife has been under the microscope and has prompted opposition objections in parliament - observers expect the government may very likely deliver more good-looking headline figures whatever inflation experts say should realistically be anticipated.

Currently, Turkish President Recep Tayyip Erdogan is again offering the markets certain arbitrage - the Turkish lira remains under relative pressure and is expected to remain so up until the MPC meeting.

The local currency, however, on September 3 strengthened into the 5.72s against the USD and global news services said “it was due to better-than-expected inflation”.

Turkey’s eurobonds also gained across the curve on a daily basis despite the 5-year credit default swaps (CDS) hovering above 420.

Mainstream research reports take the official inflation figures as a given. They do not question how it is that inflation is falling amid the tax and price hikes that are proliferating in Turkey.

The explanation for the strengthening lira, meanwhile, is taken to be the better-than-expected inflation but the portfolio inflows data do not support this argument.

To be fair, the government has already managed to keep the exchange rate under control for longer than expected, except for a “negligible flash crash”.

If the end of this story of Turkish economic hubris does not prove to be dramatic, treatises on economics will have to be rewritten in line with 'Erdoganomics' as throughout history, all around the world, all attempts at pressing down on both the exchange rate and interest rates have ended in hyperinflation.

Tamed real food prices in the upcoming winter season would also prove a game-changer in economic history, with a chapter reserved for the government intervention in the market since last winter, which has even involved the state setting up its own food and veg stalls with prices to scare the living daylights out of private retailers.

At the bottom of its September 3 story on the latest Turkish inflation rate, Reuters had a sub-headline reading “Data Questioned”.

“But a string of better-than-expected data in recent months, including lower inflation than forecast in four of the last five months, has led to criticism by the main opposition party, the Republican People's Party. It filed a motion in parliament in June claiming a TUIK methodology adjustment damaged credibility. On Tuesday, Republican People's Party spokesman Faik Oztrak said on Twitter that 'despite all the price hikes' monthly CPI was only 0.86%. TUIK 'should do the nation a favour and announce the addresses of where it takes the prices from. Our nation should not be deprived of these cheap and reasonable prices,' he wrote…"

"Enflasyon" - the Turkish word for inflation - was among the country's top trending topics on Twitter on Tuesday, the Reuters note added.

However, the report ended by tying the freefalling official inflation to “the so-called base effect”. The author will avoid an ultimatum from the Turkish government.

The Bloomberg story on Turkish inflation did not mention the pricing controversies. Some of the news agency's staff members have a court hearing this month where they will face the allegation of “attempting to undermine Turkey's economic stability”.

Ending up in prison due to undermining something that does not exist is a common occurrence in the Realm of Erdogan.

The argument of the government and its proponents suggests that Turks are idiots who do not understand the high-level mathematics that underpin the descent of inflation. Prices cannot be booming, although, of course, they are.

Esoteric economic rules such as declining demand are also said by officials to explain the fall in inflation. The fact that people are abandoning using utilities because utility prices have more than doubled has not yet been explained.

Turkey’s state-run pipeline company BOTAS hiked natural gas prices by 14.97% as of August 1 and by another 14.97% as of September 1.

“Pretty remarkable disinflation process going on - but a reflection, I think, of the depressed state of domestic demand. Firms just lack pricing power. Add in herein very favourable base period effects. Very possible to see single digit inflation by October, but then rising slightly to year end. Erdogan is always a lucky politician - and the global easing cycle, plus lower oil/energy prices which come with weaker global growth are certainly helping out here,” Timothy Ash of Bluebay Asset Management said in an emailed note to investors.