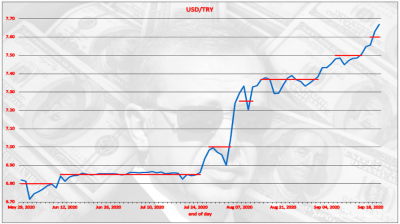 As the Turkish government's options narrow in the face of the depreciating Turkish lira, there is a risk it could introduce a moratorium on foreign currency payments across some or all asset classes to preserve FX or impose capital controls, Moody’s Investors Service said on September 21 in answers to frequently asked questions on Turkey’s credit risks amid sustained lira pressure.

“Either of these outcomes would be highly damaging for domestic businesses and would likely constitute an event of default by the sovereign because they can impair sovereign debt service. Moreover, they would not solve the fundamental structural challenges the Turkish economy faces,” it added.

Sanctions imposed on Turkey by either the US or the EU over foreign policy clashes were “possible this autumn”, Moody’s also noted.

The sustained lira depreciation, steady capital outflows from Turkey and a significant drop in the Turkish central bank's foreign currency reserve position have again shifted the focus to the country’s balance-of-payments position, Moody’s pointed out.

The ratings agency addressed the question of “Why is Turkey’s external position now such a risk?”

It responded that the scale of intervention in the FX market this year makes it difficult to see the lira as in a floating currency regime. As a result, there is a significant probability of a disorderly exchange rate adjustment that triggers significant economic and fiscal disruption, according to Moody’s.

Imports would likely become more expensive and lead to a spike in inflation, while the high import content of exports would limit any competitiveness gains from a weak lira, it noted.

“A number of state-owned banks would likely post losses on the short FX positions they have accumulated trying to defend the lira in recent months,” Moody’s said, adding: “Moreover, if the state-owned banks were to see sudden and significant withdrawals of FX deposits, these short positions could suddenly be uncovered.”

Looking at the subsequent question of “Has this limited the range of policy options available to the government?” Moody’s said: “Although some of the measures taken by the banking regulator to support domestic demand during the pandemic are now being withdrawn, credit growth is still likely to exceed 30% at the end of the year.”

It also noted that “Turkey's size and its clear structural economic imbalances limit the meaningful support of bilateral assistance” and that “Turkey's borrowing from the European Investment Bank, which is the country's single-largest lender, was frozen through at least the end of 2019 and remains heavily restricted.”

In answer to the question, “Does a healthy fiscal position not offset these credit risks?” the ratings agency would certainly be advised by some observers surveying the growing financial carnage in Turkey to reply “Healthy what?” But that might draw too much attention to the role of the ratings agencies amid the prevailing global financial order in not drawing attention to the destructive policies of the ruling so-called Justice and Development Party (AKP) that have incrementally wrecked Turkey’s economy, while delivering gains for favourites, since 2002—yes there were good days in between, but the deterioration of the fundamentals has been relentless and if the ratings bigwigs claim that they did not know, then that is no defence, for they should have known and should have spoken up.

By now, Turkey’s economic situation is so dire that opposition politicians are warning that the official data cannot be taken seriously. The GDP figures, say those struggling to get a hearing, are inflated and, for instance, the numerator of the debt-to-GDP ratio does not include obligations to public-private partnership (PPP) black holes.

“Risks to our baseline forecasts are elevated. This situation could be exacerbated if, for example, the government's desire to revive growth were to lead to larger than expected budget deficits or if it needed to cover additional losses from public-private partnerships (PPPs), the Credit Guarantee Fund or the Turkish Wealth Fund,” Moody’s stated. As well it might.

Turkey seen as attracting $4bn via USD-TRY swaps during one week
BEYOND THE BOSPORUS: Turkey shakes off reality in the pursuit of single-digit inflation
BEYOND THE BOSPORUS: Erdogan swallows humble pie and bitter pill as market gets its rate hike but watch for sleights of hand