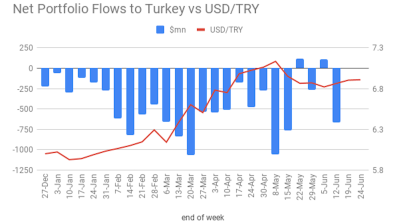 Morgan Stanley Capital International (MSCI) is considering launching a consultation on a proposal to reclassify the MSCI Turkey Index to the Frontier Markets or Standalone Markets status if the accessibility level of the Turkish equity market further deteriorates, the company said on June 23.

As highlighted in the MSCI 2020 Market Accessibility Review released on June 17, the accessibility level of Turkey’s equity market has been adversely impacted by the introduction of short-selling and stock lending bans in October 2019 and February 2020, respectively, MSCI noted.

These bans severely restrict the ability of institutional investors to express views in active investment and hedge portfolio risk, it added.

“While volatility increased dramatically due to the COVID19 pandemic, global equity markets remained accessible and continued to function well, allowing issuers to raise capital and investors to manage risk during the crisis,” Dimitris Melas of the MSCI said.

“In the last 12 months, two important Emerging Markets, Argentina and Turkey, suffered substantial deterioration in market accessibility that could lead to their exclusion from the MSCI Emerging Markets Index,” he observed.

MSCI also pointed out that it reclassified Iceland as a Frontier Market from Standalone Market after capital controls, including a special reserve ratio, were removed on March 6, 2019.

On June 23, S&P Global Ratings said that it had classified Turkey’s banking sector in its assessment framework in the same group as the banking sectors of Azerbaijan, Egypt, Kazakhstan, Greece, Bangladesh and Argentina. It took a swipe at the checks and balances within the Turkish institutional system, describing them as weak. Questions remained about the quality of regulation and the perceived independence of the watchdog and the central bank, it said.

Fitch’s second rating review release for Turkey is expected on August 21. Moody’s second review is scheduled for December 4, while S&P is set to release its last scheduled review for this year on July 24.

Moody’s Investor Services previously scheduled a Turkey sovereign rating review for June 5 but that date has been put back. In its latest rating action on Turkey, in June last year, Moody’s issued a downgrade to B1, four notches below investment grade, with a negative outlook.

On June 15, Moody’s Investors Service said that it had downgraded Turkey’s flag carrier, Turkish Airlines, to B3, six notches below investment grade, from B2.

Bolivia and Tanzania have B1/Negative ratings from Moody’s too while Fitch sees Bahrain, Bangladesh, Guatemala and Uzbekistan at BB-/Stable.

On June 18, ING Bank said in a research note that it saw a possible turning point in foreign investors’ interest in Turkish domestic government bonds occurring by mid-July when the recent deal between Brussels-based Euroclear Bank and the Turkish Finance Ministry comes into effect.

As of June 24, the last transaction in Turkey’s 2-year benchmark papers had occurred on June 22.

According to Mercan and Pham, the Euroclear deal “should be a signal of the government’s interest to attract portfolio flows and commitment to free movements of capital.”

This, it must be said, does not reflect the Turkey of today, given the market machinations of the Erdogan regime. It has no grounding in reality.

We are doing journalism in the post-truth age. Politicians pursue their manipulations and no one is surprised, for they are politicians, but those of us supposedly not buying into the Orwellian deceit need to hold on to verifiable facts for dear life.

On June 19, Moody’s said that it had decided to withdraw the ratings of ING Bank Turkey for its own business reasons.

“Business Reasons — Under certain circumstances, Moody's will withdraw a rating for an issuer or an obligation for reasons unrelated to the adequacy of information, or bankruptcy or reorganization status of the credit. When this occurs, Moody's will balance the market need for a rating against the resources required to maintain and monitor a rating,” according to Moody’s guidelines.

In March, Bloomberg quoted some unnamed sources as saying that ING Groep NV, the biggest Dutch lender, was considering a sale of its Turkish business.

ING has not officially denied the report.

According to ING’s macroeconomic research notes, the Turkish economy is doing pretty well and a huge inflow of portfolio investments is on the way.

ING does not release research on banking regulations in Turkey.

Sea snot is the perfect metaphor for the Erdogan regime. That was my first thought when I saw the visually arresting images of the Sea of Marmara enveloped in a suffocating gunk.

MITTELEUROPEAN INSIGHTS: EU and Austria – what is your stance on the Belarus sanctions?

In the end, the EU has agreed to comprehensive economic sanctions against Belarus. Sectoral EU sanctions are to be revealed and likely adopted by the EU on 24-25 June and reportedly include sanctions on potash and mineral fuel exports and finance.

Joe Biden is the fifth American president to hold a bilateral summit with Vladimir Putin. But he is likely the first post-Cold War US president to have a realistic understanding of what Russia is and what it wants.

It's the anniversary of Operation Barbarossa on June 22, when Hitler launched his surprise invasion of the Soviet Union, completely catching Stalin unawares. The ultimate victory over the Nazis has become a centre-piece of Putin's Russia.

RIMMER: Sea snot as metaphor
15 hours ago
Amid Afghanistan pullout observers ask if there's a place for a US military base in Central Asia
21 hours ago
MITTELEUROPEAN INSIGHTS: EU and Austria – what is your stance on the Belarus sanctions?
1 day ago
ECFR: Biden meets Putin: America, Russia, and the return of diplomacy
5 days ago
RIMMER: Unhappy anniversary: Operation Barbarossa
9 days ago