TURKEY INSIGHT: Official inflation hops up to 16.65% but that’s not enough to blow Erdogan’s plan off course 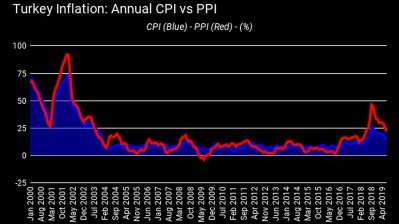 The market expectation for the July reading was for around 16.9%.

The TUIK will likely find the grounds to on September 3 announce a lower headline CPI reading for August to pave the way for another chunky rate cut from the monetary policy committee meeting scheduled for September 12.

As long as the Turkish lira remains stable, the central bank will follow up on last month’s 425bp rate cut with a further aggressive easing, Jason Tuvey of Capital Economics said in a research note.

Meanwhile, the story of high real rates in Turkey has eroded fast despite official inflation declining sharply in recent months prior to July.

“Real rates [in Turkey] are now just over 300bps, versus 800bps in Ukraine, 2,000bps in Argentina, 425bps in Mexico, 225bps in SA, 280bps in Indo, 270bps in India, 275bps in Malaysia, 700bps in Ghana, 350bps in Kazakhstan. And all these run much more orthodox monetary policies,” Timothy Ash of Bluebay Asset Management said in an emailed note to investors.

The story of favourable global conditions has also partially melted away following the latest escalation in the trade war between the US and China, but the lira remains below 5.60 to the dollar amid sharp depreciations in emerging market currencies.

“The falls in EM currencies in this latest leg of the trade war have been large compared with previous episodes,” William Jackson of Capital Economics said on August 5 in a research note.

The lira was the exception thanks to the strong role taken by the government.

Ankara’s approach is notable at a time when countries everywhere are aiming to devalue their currencies to strengthen their trade competitiveness. In contrast, the Erdogan administration is still trying to maintain its high interest rate/low FX rate policy albeit with what some experts say can be deemed fake real rates.

Erdogan’s real rates may be fake but the real return he offers is high as long as he can avoid another currency crunch.

The Japanese retail investors quoted by the news service come across as having no idea what is actually going on in Turkey, but they are happy with the nominal lira yields at a time when the Turkish currency is emerging as the currency in the world on the strongest trajectory; their approach based on their FX-denominated returns is better than calculating real rates with artificial inflation figures as the inflation or interest rate parities for the lira never hold.

This is not the first time that crafty politicians in Turkey have exerted pressure on the exchange rates and manipulated official data.

And it is always followed by a sharp, sudden realisation of accumulated devaluation with the convenient but misleading trigger being something like a kidnapped US pastor that rocks the geopolitical boat, the president throwing the constitution out the window or Ankara getting the West’s back up by working on defence with the Russians.

Let’s wish that someone can tell the Japanese when they should say goodbye to their arbitrage, but they told Bloomberg they’ve only allocated 15% of their portfolios to lira bonds.