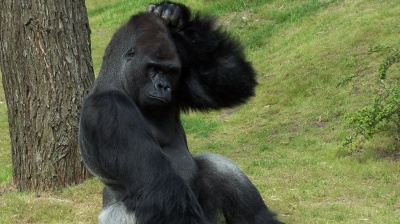 There's one thing you can say for Turkey's latest official inflation data. They're a head-scratcher.
By bne IntelliNews November 4, 2019

Turkey's consumer price index (CPI) inflation fell to 8.55% y/y in October from 9.26% in September, official data showed on November 4, perhaps paving the way to further interest rate cuts on top of the 1,000 bp of easing brought in since the previous central bank governor was fired by the president in July. 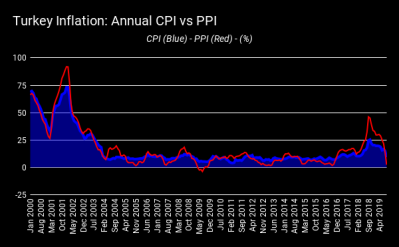 The latest rate, which was in line with expectations, is the lowest seen in nearly three years. However, that is particularly due to temporary measurement "base effects" from last year when annual inflation surged to a 15-year high of more than 25% in October as a consequence of the lira crisis that led to rocketing import prices.

“Not sure many people locally believe the data,” Timothy Ash, senior emerging markets strategist at BlueBay Asset Management in London, said in a note to investors after assessing the latest inflation figures. “But should open the way to more rate cuts from the CBRT [Central Bank of the Republic of Turkey), likely at the next MPC meeting.”

“Inflation in Turkey—single digits? Taxi from airport in July was TRY115 now TRY150,” Ash added on November 4 in a tweet, observing in another: “Turkey—decent inflation print for October, if you believe the data…”

The Erdogan administration has been leaning on (or instructing in the eyes of some observers) the central bank to bring in aggressive monetary easing to kickstart economic growth. The central bank’s monetary policy committee will next meet on rates on December 12. The national lender lowered its year-end forecast for CPI to 12% from 13.9% last week, bringing its outlook in line with that of the Treasury.

In a scathing note to investors on the latest economic and financial markets situation in Turkey, Julian Rimmer of Investec said on November 4: “Although Turkey is at war [in Syria] and under threat of sanctions from the US and governed by an intemperate Old Testament theocrat… Fitch [on November 2] decided Turkey's medium-term economic future was stable and upgraded accordingly.

“This combined with yet another suspiciously dovish inflation release for Oct militates for one more significant rate cut before year-end. CPI annualised 8.55% and leaves Turkey's rates positive to the tune of about 5.5%. The next MPC is Dec [12] but I wouldn't be buying the mkt regardless. Too much $hit flying round.”

The central bank’s case for further lowering interest rates is weak because inflation is expected to take off again due to unfavourable base effects, ING Turkey’s Muhammet Mercan said, taking a line backed by a strong consensus of analysts. 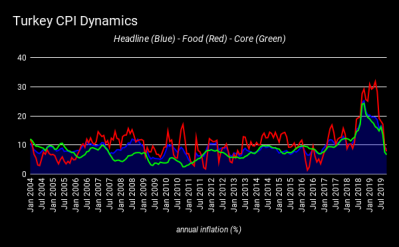 The official data also showed food price inflation dropping to 7.9% from 9.5%, below the central bank’s year-end forecast of 10%. Core inflation, which strips out items such as food and petrol prices, fell back to 6.7%, TUIK said.

“Inflation now at a trough”

Jason Tuvey, senior emerging markets economist at Capital Economics, said in a note: “We think that inflation is now at a trough and will start to rise over the coming months. After all, the plunge in inflation over the past couple of months has not been truly reflective of underlying price pressures—it has largely been due to favourable base effects.

“That is unlikely to deter the central bank from cutting interest rates a little further in the near-term. Admittedly, November’s inflation data will be released prior to the next policy meeting on 12th December and are likely to show a rise in the headline rate. But President Erdogan recently reiterated his calls for interest rates to be cut to single digits. And last week, the central bank lowered its inflation forecasts. Against this backdrop, we think that there will be a further 150bp of rate cuts, to 12.50%, by early next year.

“Further out, though, we think that inflation will rise much higher than the central bank anticipates. This, combined with our view that the lira will come under downward pressure, means that policymakers will probably have to reverse the easing cycle around the middle of next year.”

Turkey sees unexpected rise in inflation as lira weakness pushes up prices
1 day ago
Russia's services PMI bounces back to 35.9 in May from a record low of 12.9% in April, but business still contracting
1 day ago
Easing of lockdowns offers hope to emerging Europe’s COVID-struck economies
2 days ago
Kazakh manufacturing ekes out PMI expansion in May
2 days ago
A third of Russians are ready to participate in a mass protest against falling living standards
2 days ago