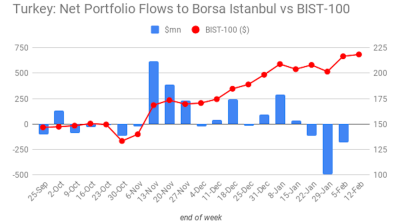 Borsa Istanbul’s benchmark BIST-100 index moved into the 1,500s on a Turkish lira (TRY) basis in the first week of January and saw an all-time high of 1,582 on January 21.

The index fell back into the 1,400s in the last week of January but the ‘invisible hand’ often remarked upon by watchers of Turkey’s stock exchange then laid a floor.

Across February, the BIST-100 has been moving about in the 1,500s while a sharp appreciation of the lira in the USD/TRY rate from TRY7.47 on January 15 to TRY7.00 on February 12 supported USD-basis gains.

If the policy rate is cut in the coming period, investors in domestic government bonds will write profits, but USD-basis returns will depend on a possible lira depreciation that would follow the rate cut under normal conditions.

On January 20, bne IntelliNews reported that the most popular Turkish exchange traded fund (ETF), the iShares MSCI Turkey, signalled outflows in the first two weeks of 2021.

The ETF investors were again a few weeks ahead of the subsequent foreign portfolio in or out flows on the Borsa Istanbul.

It was already possible to short BIST-30 components, but the move added 20 stocks to the short-sale scope.

This is neither positive nor negative but if someone happens to want to sell those 20 stocks in question short, they now can.

The “normalisation” of Turkish economic policy story has been oversold and the short-termists who arrived for the said normalisation have started taking profits.

Meanwhile, someone is not letting the Borsa Istanbul fall. So, it appears that massive short sales that would negatively impact the benchmark indices are not possible.

It is calculated that through the swap channel more than $14bn has arrived in Turkey since November 6, in addition to the $1bn that has flowed into Borsa Istanbul and the $4bn that has gone into domestic government bonds, $2bn of which was in repo form.

Through eurobonds, foreign investors have bought a nominal $8bn worth of papers while the market value of their Turkish eurobond holdings has risen $14bn since end-October.

On February 12, the balance of payments data suggested $10bn of financial inflows and $3bn via net errors and omissions in November and December.

The current account deficit remained at more than $3bn in each month, totalling $7bn.

As a result, the international reserves moved up $7bn.

Loan renewals continue but no significant net inflows or outflows are seen here.

Meanwhile, an emerging clamour over declines in FX deposits continues to build. Market-makers are aware that most of the change is due to fluctuations in the EUR/USD and XAU/USD pairs but falls in FX deposits get big headlines in the weeks when the USD gains and USD-basis nominal value of FX deposits decline.

When the USD loses and FX deposits rise, the movement is ignored.

From end-October to February 5, the nominal value of FX deposits rose by $12bn. @VeFinans calculated a currency-adjusted increase at $11bn.

In January, the nominal decline stood at a limited $604mn but the currency-adjusted figure suggested a $864mn increase.

In the first week of February, the nominal figure declined by $2bn but the currency-adjusted value implied a $837mn decline.

It is possible to conclude that the Turks are not rushing into FX and gold anymore since the banking system is no longer pumping out fresh lira.

However, the idea that the Turks are in fact rushing to sell their FX and gold does not reflect reality—Turkey is not even at the start when it comes to solving its ‘goldollarization’ problem.

The same story runs through the reserves. @VeFinans calculated that the gross central bank reserves rose by $11bn to $96bn on February 5 from $84bn at end-October.

However, the net reserves declined by $5bn to $14bn since swaps declined by $8bn to $59bn on February 5 to allow banks to swap USD/TRY in London.

As a result, the shortage in the net reserves excluding swaps declined by $3bn to $45bn on February 5 from $48bn at end-October.

On January 16, we noted: “If the central bank saves $2bn each month via its rediscount export credits and Botas transactions, it would recover the $139bn in reserves it burnt through in defending the lira in around 70 months. In less than 25 months, its net reserves excluding swaps would turn positive.”

From end-October to February 5, local banks also increased their FX at foreign banks by $8bn to $26bn.

All in all, since November 6—when the economic policy U-turn got its big hailing—the lira has no longer been tumbling down a cliff face, but it is not possible to pump up the volume on a story that things in Turkey are now swell.

Even a smooth reversal in the hot money inflows could light up the Turkish markets. And there’s no need to mention what could happen if some actual risk materialises, such as snap polls ahead.

In the real economy, innumerable employers and employees—and the jobless—sense the death spiral. Social tensions driven by bleak hunger continue to grow behind the curtain.

As for the Biden administration, nothing concrete on its Erdogan policy has yet been signalled beyond talking some talk and conspicuously declining to include Turkey’s president on the A-list for a telephone call. But those dealing with the Turkish markets clearly don’t sense anything tangible called “the Biden risk” anymore. Erdogan is smarter than all of them when it comes to playing issues off against each other and the sense is clearly that he’ll wangle a role in Biden world without having to give much away when it comes to annoyances such as democracy.

ING: Turkey’s inflation remains on an upward path
ISTANBUL BLOG: A false spring for Turkish markets
Political row in Turkey as opposition asks 'What happened to the $128bn in FX reserves?'

ING: Turkey’s inflation remains on an upward path
16 hours ago
FPRI BMB Ukraine: Kyiv aiming for a staff-level agreement with IMF by late May
1 day ago
ING: higher oil does not mean better outlook for Russia’s ruble
1 day ago
COMMENT: Democracy is struggling in Georgia
1 day ago
OBITUARY: World’s longest-serving city mayor Milan Bandic dies of heart attack
3 days ago