TURKEY INSIGHT: Strongman Erdogan takes on the markets. Rate cuts add up to 1,000 bp since he fired central bank governor 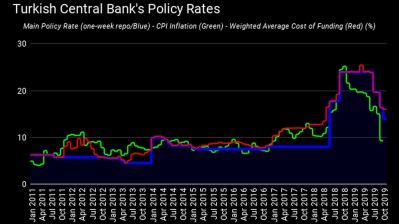 When it comes to credit taps in Turkey the word from the Erdogan administration remains that it wants them yanked wide open. On October 24, the central bank duly obliged, cutting its policy rate by another 250 bp, taking it to 14%. In July, the rate stood as high as 24%, so make that an eye-popping 1,000 bp of cuts that the national lender has delivered since Turkish President Recep Tayyip Erdogan fired the central bank governor and replaced him with a successor who—rather conveniently—would seem to have the same gung-ho approach to monetary loosening as Turkey’s strongman.

Erdogan is throwing everything but the kitchen sink at the enemy. And that enemy is an economy that—okay, there aren’t that many folk around who’d want to say this to his face—he ballsed up in the first place by drenching the country in foolhardy loose credit.

Having lost a string of city elections this year, after the economy became mired in a painful recession following the summer 2018 lira crisis, the once seemingly invincible Erdogan knows he and his Justice and Development Party (AKP) are plumbing new depths of unpopularity, with some serious challengers waiting in the wings. Might his answer—another deluge of cheap money—provide him with a further lease of economic, and thus political, life, however short-term it may in the end prove to be?

“They’re happy to take the markets on”

Timothy Ash, a senior strategist at BlueBay Asset Management, responded to the latest rate cut in a note to clients, saying the reduction was “perhaps a risky move, but this is a risk-taking central bank and administration. They are happy to take the markets on”.

Ash added that he believed Turkey has opted to front-load its cuts and may now keep interest rates steady until the end of the year.

The 250 bp reduction in the benchmark rate was deeper than economists generally expected (the median estimate of a Reuters poll of 20 economists was that a 100 bp cut was in the pipeline). But the regulator cited a slowdown in the pace of price rises (although bne IntelliNews has long been at pains to point out the questionable veracity of the inflation figures coming out of the national statistics agency TUIK), and then there was also US President Donald Trump’s decision on October 23 to lift economic sanctions on Turkey for its military offensive in Syria—that helped the Turkish lira (TRY) gain some ground and provided room for the central bank to persevere with its cutting cycle.

In a statement on its latest rates policy decision the central bank said: “In addition to the stable course of the Turkish lira, improvement in inflation expectations and mild domestic demand conditions supported the disinflation in core indicators.”

“This is a political decision”

However, responses to the rate-setters’ move included economist and Ahval contributor Guldem Atabay stating that “This is a political decision, rather than an economic one” and analysts are wary of the flood of cash that Turkish officials are opening the gates to. It could again drive inflation higher, they warn, and as recently as early October the IMF was in town chastising the central bank for too much aggression in its monetary easing and calling on Turkey to keep rates on hold until it sees a “durable downturn in inflation”.

Atabay also observed that the Turkish decision makers were relying on rate cuts from central banks in major economies to boost capital inflows to emerging economies. “Given that inflation will rise again to double-digit figures in a short time, a 14-percent policy rate with an inflation [rate] around 12 to 13 percent will make the Turkish economy more fragile,” she cautioned.

Jason Tuvey, senior emerging markets economist at Capital Economics, said in a note that he thought that “with inflation set to start rising again and the lira likely to come under pressure, we think that the central bank will have to reverse course by the middle of next year”.

Turkey’s headline inflation rate fell from 15.0% y/y in August to 9.3% y/y in September as the effects of last year’s currency crisis continued to unwind. In the accompanying statement explaining its latest rate cut, the central bank’s monetary policy committee (MPC) said that inflation would now be “notably below” the projection in the July inflation report for it to end 2019 at 13.9%.

The July report also outlined how the central bank expected inflation to still be in the single digits in the middle of next year. In contrast, Capital forecast that it would be closer to 13%.

Tuvey added: “[…] given that September’s fall in inflation had followed a cumulative 750 bp of rate reductions, President Erdogan probably felt vindicated in his unorthodox view that lower interest rates are needed to bring down inflation. Mr Erdogan has been quiet on interest rates in recent weeks, but there was probably pressure on the MPC behind the scenes to push ahead with aggressive easing.

“Risks lie firmly to the downside”

“We think that the easing cycle will continue over the next few months. Pressure from President Erdogan is unlikely to let up as the government attempts to turbo-charge the economic recovery. The muted market reaction to the steeper-than-expected rate cuts at the past three meetings will probably give the CBRT [Central Bank of the Republic of Turkey] the confidence that it can loosen policy further. All told, we expect the one-week repo rate to be lowered to 12.50% by early 2020, although the risks lie firmly to the downside.

“As things stand, we think that this will comprise a 100 bp cut in December and a 50 bp reduction in January… Looser monetary and fiscal policy, coupled with state banks ramping up lending, will bolster the economic recovery over the coming quarters. But this will fuel a fresh build-up of macro imbalances. Inflation will rise.”

However, the currency, predicted Tuvey, would come under pressure in the longer run, with Capital expecting it to fall by more than 20% against the dollar by end-2020. Against the backdrop of higher inflation and a weaker lira, it also forecast that the key one-week repo rate would end next year at 14.00% and be hiked further to 17.50% by end-2021.

Turkey’s looser monetary policy is dovetailing with increased government spending to stimulate the economy. GDP is forecast to expand just 0.5% this year, but Erdogan has targeted an ambitious 5% growth rate in 2020 as he bids to prove to Turks that he still retains the economic magic touch he was able to sell to voters before last year’s currency crunch left him threatened by the dunce cap.

An advantage of higher rates, if they were brought in, would be that they would theoretically support the lira, helping the central bank to restore its quite paltry foreign currency reserves. They have dwindled as officials sought to defend the lira repeatedly this year, with particular squeezes coming before the end of March local elections, the June Istanbul ‘revote’ and October’s Turkey incursion into Syria.