TURKEY INSIGHT: The lira has belly-flopped and London, it is your fault 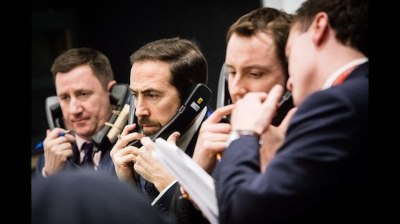 Watch what you say about the lira. Ankara is watching you.
By Akin Nazli in Belgrade May 7, 2020

Turkey was not taking kindly to the sight of the Turkish lira weakening to an all-time low on May 7, beyond the rate seen during the country’s 2018 balance of payments crisis—government-run news service Anadolu Agency (AA) took the lead in bashing “manipulative” London-based financial institutions, reporting that their attacks on the currency were continuing.

With the Turkish lira (TRY) falling in afternoon trading as far as 7.2685 to the USD—compared to the nadir of 7.2362 seen during the crisis—AA relayed to readers how the institutions were attempting to push the lira into further depreciation by swiftly buying large amounts of FX with the currency that they did not possess (short selling), adding that regulators had launched an investigation. It neither specified which regulators, nor named any banks or institutions facing the allegations.

The news service also stated that according to information compiled by an AA reporter from banking sources the financial institutions concerned defaulted after failing to meet their lira liabilities to Turkish banks for FX they had bought, even though the Turkish central bank extended the closing time of the electronic fund transfer (EFT) wire.

AA also emphasised how the banks had snubbed free market rules and had pricked the attention of officials by launching their attacks targeting Turkish markets at the exact time that Treasury and Finance Minister Berat Albayrak was holding a meeting with investors on the afternoon of May 6.

The Erdogan administration typically blames foreign market players when the lira gets into severe difficulties. It did so at the time of the currency crisis 21 months ago and when the currency hit turbulence during Turkey’s spring local elections last year, which produced the controversial Istanbul “revote”.

London-based investment banks defaulted in USD/TRY transactions prior to those local polls, with TRY interest rates in London jumping to over 1,000%, AA recalled.

AA’s article was published in its Turkish edition. There was no lira story carried by its English edition as of 13:00 Istanbul time.

“They” are creating perceptions and spreading fear on the lira market, daily Sabah—a publication seen as fiercely loyal to President Recep Tayyip Erdogan—reported in its May 7 Turkish edition. There was no lira story in its English edition as of 13:30 Istanbul time.

According to Sabah, “they” have been trying to muddy the picture by flaring up a discussion commenced over the central bank’s FX reserves.

No central bank reserve is designated as “unusable”, Sabah underlined, adding that the national lender’s gross reserves stood at $88bn, while the banks’ gross reserves amounted to $35bn, bringing total reserves to $123bn.

Also blaming market actors in London for the latest assault on the lira was Haberturk.

“With thinking USD depreciation is due to Forex markets, we’ve forbidden Forex… No need for a commentary,” Gokhan Uskuay of Tacirler Invest wrote in a tweet when asked about “AA’s London story”.

“My humble advice to the central bank and officials. Liquidity procurement via dollar contracts at VIOP [Borsa Istanbul Derivatives Market] could be revived. At the moment, biggest buyers are local institutions that have FX debt or for imports,” he added in another tweet.

Braced for organised assaults on the lira, Turkey’s institutions sat tall in their saddles.

Banking watchdog BDDK said that it had banned BNP Paribas, Citibank and UBS from performing lira transactions since they had fallen short of meeting their lira liabilities to Turkish banks at maturity.

Involvement in trading on rates, FX and credit default swaps (CDS) “that increases disorder in markets by taking advantage of shallow markets or price fluctuations during offer and demand abnormalities” is considered misleading and manipulative, according to BDDK’s “Manipulative and Misleading Trading on Financial Markets” regulation published early on May 7 in Turkey’s Official Gazette.

Swaps, forwards, options or other derivative trading with foreigners or providing lira abroad in a way that undermines the banking regulator’s restrictions would be deemed manipulative trading, while the spreading of “misleading or wrong information” as regards financial assets by any mass media tool would be considered manipulative, the new regulation also stated.

“Lots of people have focused on the Albayrak call [with investors on May 6] as the driver for the TRY weakness yesterday. I don’t think that is the case, as the TRY had already started weakening earlier this week… On the Albayrak call, I thought he did a decent job, and the Treasury prepared presentation was good—lots of data/info and Albayrak highlighted key strengths which are often overlooked,” Timothy Ash of Bluebay Asset Management said after the BDDK regulation was issued in a note to investors.

“I guess there was not that much new, and there was no new info on progress on securing FX SWAPs from friendly central banks, and he gave a straight bat on the IMF front. I have to say that compared to lots of presentations from MOFs [finance ministries] in EM I have seen in recent weeks on COVID19, this was one of the better ones. But the problem for the TRY is more fundamental at this stage… the market does not trust monetary policy in Turkey,” Ash added.

Another slash in the wind

Wags on the market commend Albayrak for delivering the best PowerPoint slide shows across the EM universe—but, more seriously, they’re quick to add that the Turkish central bank has little or no credibility left, thus the finance minister really should come up with some more meaningful content if he’s not to find himself taking yet another slash in the wind. Who murdered that credibility? Perhaps “some London-based financial institutions”?

Academic and market commentator Evren Bolgun was one of many observers dumb-founded by the new BDDK regulation, writing on Twitter that no other country has such an open-ended and unjust regulation.

“We can say martial law has been declared on FX markets. Everything’s considered to be manipulation, i.e. saying that the central bank’s net reserves are negative or at $3-10bn is becoming manipulation,” Uskuay also observed.

The new definition of manipulation by the BDDK covers everybody and everything from the investor to the broker, the commentator, the man on the internet, the man on the street, information, analysis and the set down content of a commentary, he added.

Former central banker Ugur Gurses, who is considered by the Erdogan media as one of the leading pawns of some lobbies in Turkey, has published an “FX intervention guide” for “those who have a passion to intervene in the exchange rate but who do not have enough experience to do it”.

Some of his basic points are as follows:

·       Don’t forget everyone sees everything

·       Always control whether the currency depreciation is due to FX liquidity

·       If depreciation is due to economic fundamentals, leave the exchange rate rather than holding it

·       If you intervene in the exchange rate under a free-float regime, you give the message of “fear of fluctuation”

·       If you’re applying a free-float regime and, at the same time, you stubbornly want to intervene in the exchange rate, don’t intervene as a “rookie trader” by defending the “resistance” levels, but do it as a central banker

·       Never snub your exchange rate policy to a “second hand” even if it is a broker at a state bank.

ING: Hungary starts fourth quarter on a bad footing
10 hours ago
MEDUZA: Ukrainian strikes on targets inside Russia could mark a new phase in the war
11 hours ago
ING: Europe faces stiff competition for natural gas
6 days ago
PANNIER: Might Tokayev be the real deal?
10 days ago
OPINION: Bosnia economic salvage supplants breakup mood
16 days ago