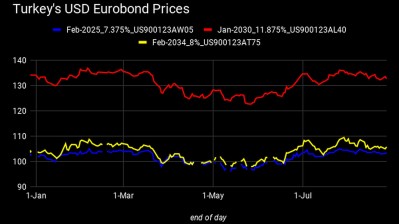 Each of Turkey’s 25 various outstanding USD-denominated sovereign eurobonds and each of its eight EUR-denominated eurobonds have lost value in August to date on a month-on-month basis while each of four USD-denominated international sukuk bonds gained ground, Is Invest’s daily bulletin showed on August 27.

Turkish corporates’ eurobonds, meanwhile, delivered a mixed picture in the past month.

The lira has been depreciating since August 8 when it tested 5.45 and in the past two trading days, following a Japanese overnight ‘flash crash’ on August 26 said to have hit ‘mom and pop’ investors in the currency, when it plunged as far as 6.40, it has settled down at just over 5.80.

Over the same period, the yields on Turkey’s 2 and 10-year domestic benchmark bonds rose to more than 16% from the 14%s, while 5-year credit default swaps (CDS) for Turkey are hovering above 400.

There is a long list of reasons why Turkish assets should depreciate, but explaining the market fluctuations in line with the actual news flow has not been possible in recent months.

Since November last year, in the eyes of many observers Turkey has gradually lost its free market status. That feeling was particularly keen after Erdogan administration officials, determined to control the TRY at a sensitive time, orchestrated a shutdown of the offshore lira swap market in London prior to the March 31 local polls, spooking foreign investors.

As things stand, current games seen on the Turkish markets involve the government versus locals who have less and less lira to buy dollars, and some vulture funds and some distant Asian funds who have no real idea about the market landscape in Turkey.

The global trade tensions and the re-escalated problems in the conflict-torn Idlib region of northwestern Syria are put forward as reasons for the latest descent seen in Turkish asset prices.

There are even arguments abroad that suggest rate cuts expected to be introduced by the Turkish central bank are behind the pressure on assets although an unexplainable appreciation was observed in the local currency following the unexpectedly bold 425 bp cut pushed through by the monetary policy committee meeting held on July 25, marking the biggest rate decrease in Turkey in at least 17 years.

US President Donald Trump’s unpredictability in bargaining with trade rivals, particularly China, provides a continuous on-off cycle. However, the overall direction it is producing over the medium term is now clearly seen as negative. Market players no longer react strongly to potential good news as they don’t know which words out of Trump’s mouth they can trust, but at the same time markets use ‘The Donald’s’ spontaneous comments as reasons to create short-term volatility.

The global slowdown is now beginning to crystallise in Europe, with Germany—Turkey’s biggest trading partner—likely slipping into recession, and the Fed is under pressure to agree another rate cut at its next monetary meeting, scheduled for September 15-16.

The Turkish rate-setters are set to next convene on September 12. Forecasts envisage them bringing in easing of up to 325bp.

The positive market impact of the rate cut by the Fed at the end of July lasted for around two weeks before the rising trade war tensions drowned sentiment.

Easing prospects as regards the Fed were given as the reason for the lira strengthening seen from the last week of July to August 8, but portfolio inflow data do not support that argument.

According to the latest data from the central bank, net portfolio inflows into Turkey amounted to only $224mn from July 19 to August 16.

From July 5 to August 16, foreigners’ net purchases of Turkish domestic government bonds amounted to only $499mn.

That sum is less than the daily volumes public lenders sell to keep the local currency under control.

After Turkish President Recep Tayyip Erdogan sacked the central bank governor on July 5 with a presidential decree, his comments suggested that bold rate cuts were unquestionably on the way.

Under normal conditions, hot money should have rushed into Turkey to benefit from guaranteed arbitrage.

On July 15, the newly-appointed central bank governor voiced for the first time the principle that the national lender should provide a “reasonable real return”.

On July 25 when the 425bp rate cut was executed, the monetary policy committee openly said in its press release that it expected monetary easing from the world’s leading central banks and subsequently rising risk appetite for emerging market assets.

The Turkish government obviously hoped for the portfolio inflows it enjoyed during previous easing cycles.

‘Pendulum strategy’
Erdogan, it seems, thought he would stick to his ‘pendulum strategy’, swinging between favouring the US and Russia, and, at the same time, work on reversing his significant loss of popularity—demonstrated by the losses in big cities he suffered in the end-of-March local polls and, even more humiliatingly, in the Istanbul ‘revote’ in June—by using his full control of the state apparatus.

Previous easing cycles have provided Erdogan with a free hand in his survival efforts. But this time things are different. The present situation is a long way from meeting Turkey’s financing needs.

Erdogan’s troubles in Idlib, where Turkish troops are now under pressure from Russian-backed forces sent by Damascus, are also used as an argument for explaining the latest bout of depreciation in Turkish assets.

The Turkish strongman was on August 27 in Russia where he was attempting to convince his Russian patron, Vladimir Putin, to stop the military advances in Idlib.

Russia is the biggest beneficiary of a weak Erdogan. The Kremlin would not trigger trouble so serious that it could threaten Erdogan’s continued rule in Turkey.

However, the Russians make pretty good use of Erdogan’s pendulum swings.

Hasty trip to Moscow
After Erdogan earlier this month entered into an open-ended agreement with the US regarding the fate of Washington’s Syrian Kurd allies in northeastern Syria, the Russians in typical fashion used this latest swing to the Americans as a reason to advance in Idlib. Hence, Erdogan’s hasty trip to Moscow (where he has been seen countless times in recent years).

On August 27, Erdogan attended an aviation fair in Russia just as a second shipment of Russian S-400 advanced missile defence systems were being delivered to Turkey. Briefings given at the fair made it clear that Putin is now leaning on Erdogan to buy Russian fighter jets to replace the US F-35s that Nato member Turkey can no longer get its hands on given the threat that the S-400s could, according to irate US senators, pose to the security of F-35 performance data.

Angry those senators may be, but of course Trump stands in the way of them bearing down on Erdogan with meaningful sanctions, just as he keeps up his massive arms sales to Saudi Arabia and orchestrates funding for his wall on the Mexican border despite all the hue and cry. Russia’s hand, or at least Russia’s great pleasure in developments, is seen everywhere, and a geopolitical shockwave for Turkey’s populist authoritarian is probably not on the horizon in the near future as long as Moscow and the White House stand to gain from his awkward, but viable, position on the chess board.

Global myopia in the face of the end of the neoliberal chapter in world history and Turkey’s habit of coming up with unexpected shocks are two abiding certainties that cannot be overlooked, but as things stand it appears that Trump and his authoritarian friends that have popped up in power around the world may have to wait for a second Trump term, should he win one in the November 2020 US election, to set about burying neoliberalism once and for all. But can Erdogan survive until then?

Seizing municipalities
Having this month cited national security reasons in seizing three municipalities won by the pro-Kurdish HDP in the local elections, Erdogan is now signalling that he could audaciously attempt to grab municipalities ruled by the main opposition Republican People’s Party (CHP) by alleging connections to terrorists. It would appear that he has lost all hope of making a genuine recovery at the ballot box given the inexorable slide of the domestic economy, thus he may be getting ready to take another step in his authoritarian journey.

Whispers in his ruling AKP party suggest his main agenda item in coming days will be his opponents within the AKP. The party is expected to launch its congress process on October 7 with municipal and provincial business to be dealt with first. Expectations that there could be a snap poll are strengthening. However, as well as a short-term sugaring of the economy with an ill-advised credit glut, Erdogan will need to pull out all the stops—legitimate and otherwise—if he is to win a surprise election. It may just be the case that he is blind to how dramatically his base of devotees has eroded amid the economic woe.