TURKEY INSIGHT: U-turn in the face of ‘Devil’s triangle’ 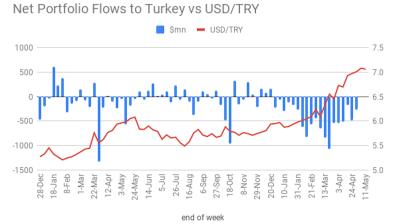 To no real surprise Turkey’s banking watchdog BDDK has quickly dropped the FX trading ban imposed last week on UBS, Citigroup and BNP Paribas, explaining that they have fulfilled their Turkish lira obligations to local lenders “in a reasonable time frame”, as outlined in a letter sent to the ‘Devil’s triangle’ seen by Reuters on May 11.

Reuters took a delicate approach to outlining how the regulators—who introduced the ban on May 7 as the Turkish lira (TRY) sank to its weakest ever rate against the dollar, at 7.2685—had withdrawn the restriction, though it told how the ban appeared to have left a “chill”, quoted a senior banker as saying all banks were now “acutely cautious” and quoted Timothy Ash at BlueBay Asset Management as saying the BDDK had been “trying to use a sledgehammer to crack a nut”. Bloomberg, on the other hand, got straight to the point, headlining its article on the episode “Turkey Lifts Ban on Lira Trading With BNP, Citi, UBS in U-Turn”.

BloombergHT reported on May 8 that local brokerage houses Ziraat Invest, Is Invest, Ak Invest and Deniz Invest have “decided” to halt new positions in leveraged TRY transactions. Spot the euphemism.

In London, bid-ask spreads on TRY transactions jumped to TRY0.50-1.00 from 20 kurus after Finance Minister Berat Albayrak’s May 6 tele-conference call with foreign investors ended with a ‘cop shop’ conclusion on May 7.

“We can see bid-ask spreads [on lira transactions] have extended. Some brokerage houses have taken steps to limit their customers’ transactions but it has not spread across the whole industry yet,” an unnamed brokerage house strategist told Reuters on May 11.

“The Turkish authorities decided this weekend that banning Citi UBS BNP from TRY trading was stupid and reversed the decision. I think the ban was ill-advised from a PR perspective, coming as it did, only a few hours after Albayrak had insisted the Turkish lira was free-floating and there were no plans to impose capital controls. If the big banks were in technical breach of regulations a quiet word would have been preferable. The abrupt volte face was a tacit admission of the damage wrought,” Julian Rimmer of Investec said on May 11 in a note to investors.

“Local brokers no longer offering fx trading on margin to retail investors. Draw your own conclusions about how that came about,” Rimmer added.

You might say that after the USD/TRY rate hit the all-time high, Turkey’s economy management clique banged their angry fist (Albayrak calls it his “iron fist”) on the exchange rates trading table. It's just not conceivable that the country's latest dire straits have been brought about by serial economic mismanagement by the Erdogan administration, is it. It must be those demoniac foreigners again.

The rate has remained below 7.10 since that "angry" moment. Bloomberg, notably, has not reported to what extent the central bank has been burning up FX reserves in defending the lira since the BDDK on May 7 introduced its regulations on currency trading manipulation that are so broad they might even penalise a raised eyebrow (note to regulator: that was an attempt at humour).

Turkey’s gross FX reserves fell to $51.5bn as of May 1 from $77.4bn at end-February, according to the latest central bank data. The gold reserves stood at $35bn while local lenders’ additional FX liquidity fell to $18.8bn ($6bn domestically held and $12.8bn at foreign banks).

Also on May 11, Turkish daily Sozcu reported how foreign investors have exited Turkey at an unprecedented breakneck speed.

Foreigners sold $8.4bn worth of Turkish securities in January-April. What’s more, 87% of the foreigners’ portfolio has buzzed off since 2012 when it boasted $71bn worth of Turkish equities and $62bn of domestic Turkish government bonds.

If the first week of the month is anything to go by, the sell-in-May mantra looks set to hold sway in emerging markets, Bloomberg reported on May 11 in a story entitled “Risks Abound in Emerging Markets as Traders Grapple With Shocks”.

On May 8, IMF chief economist Gita Gopinath said that “the world can expect more waves of financial market turbulence”.

“With the incoming economic data likely to be less reliable than usual, we think that investors should focus more on the timely low-level activity data and the changing shape of infection curves to judge which EMs sit where in the crisis. Meanwhile, question marks over the data are unlikely to alter the thinking of central banks, most of which are likely to focus on keeping policy loose and providing liquidity,” Edward Glossop of Capital Economics said on May 11 in his emerging markets economic update note entitled “Interpret incoming GDP & CPI data with a pinch of salt”.