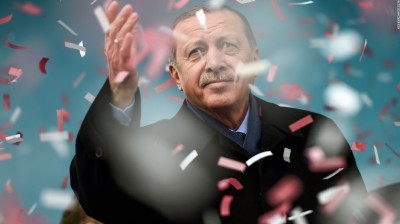 Turkish lenders are buying inflation-indexed bonds with negative yields in the face of pressure to raise their government bond holdings in order to comply with recently adjusted asset ratio regulation, BloombergHT reported on June 8.

The amended asset ratio the banks must meet is:

The banks find themselves in something of a desperate position because they have no desire to extend loans to companies and consumers that have been in debt trouble since getting hit by the fallout of the August 2018 Turkish lira crisis. At the same time, they have little additional available FX liquidity to swap with the central bank. The liquidity stood at $18bn as of May 29, according to latest data from banking watchdog BDDK. The lenders already have $30bn placed in swaps with the central bank and $25bn in required reserves.

The situation being what it is, the banks opted to boost their government bond holdings for the sake of increasing the numerator of the ratio, while they are also trying to spook their FX deposit holders and curb their deposit bases in general with the objective of decreasing the denominator.

However, as the central bank is also buying domestic government bonds, the yields in this market are nosediving.

The central bank’s securities portfolio jumped to Turkish lira (TRY) 76bn ($11.2bn) as of June 8 from TRY24bn as of March 31 while it is expected to buy more paper, BloombergHT reported on June 9.

Even prior to the coronavirus (COVID-19) crisis, the domestic government borrowing market had been subject to a series of rather brutal interventions.  From November 2018, with Turkey knocked off balance by the lira crisis, the administrators of the country’s economy employed tactics including cutting state lender bidding yields and scrapping 10-year bond sales.

There was concern that the Erdogan administration would eventually find itself having to pay hyper borrowing rates by killing its domestic borrowing market. On some days, not even a single transaction occurs in benchmark bonds.

However, no one expected that the government would venture into a big crackdown on private lenders and unflinchingly ordering the central bank to conduct unprecedented quantitative easing.

Ultimately, after the BDDK on April 17 announced an initial asset ratio applying to the banks, the 2-year benchmark yield fell to 9.5% on April 18 at the market close from 12.1% the day before, BloombergHT noted.

And let’s say, for the sake of comparisons, inflation in Turkey is genuinely only hovering above 10% (and that’s a big “let’s say” as this week has seen former ally and economy czar of President Recep Tayyip Erdogan, the famously cautious Ali Babacan, become the last person on the planet to publicly question the reliability of the data put out by official statistical institute TUIK).

Meanwhile, the Turkish banking industry’s combined securities portfolio rose by 17% to TRY909bn as of June 6 from TRY777bn as of April 17.

The highest growth was observed in the foreign-controlled lenders’ securities holdings, with 33% growth to TRY210bn from TRY158bn. Such banks have so far not succumbed to extending loans to financial “zombie” companies and Turks despite all the government pressure.

It should be noted that the government still knows its limits; it is still “kindly” only imposing regulations or sending warnings to the banking sector rather than raiding headquarters in the way it does when it comes to ordinary people.

Intent on bypassing the already booked negative yields on fixed income bonds with shorter maturities, the lenders have rushed into CPI-indexed papers, according to BloombergHT.

As a result, the yield on CPI-indexed government paper due July 2021 fell to inflation minus 0.4pp as of June 8 from inflation plus 3.5pp as of April 17, the publication also reported.

"FALLEN TO MINUS/Banks give in to return below inflation" (BloombergHT)

The yield stood at above inflation plus 5pp in December 2018 (see the November 2018 reference above for upcoming interventions in the market) and at above plus 4pp until the government initiated the non-stop policy rate cuts cycle in July 2019.

Turkish bankers right now hope that booming food prices and oil prices climbing upwards once more will be reflected in the official inflation figures, according to some unnamed bankers quoted by BloombergHT.