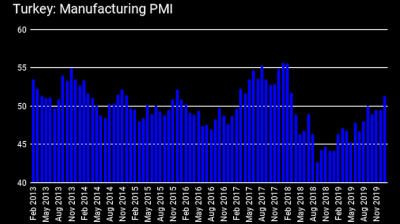 The relationship between the latest purchasing managers’ index (PMI) data on Turkey’s manufacturing sector and official figures suggests industrial production growth in the country is running at above 5% y/y at the start of the year, according to survey compiler IHS Markit.

Those pushing for a fast rebound from Turkey’s recession-ailed 2019 may take heart from the assessment, though whether the global downturn will be extensive enough to hinder that strategy is yet to be ascertained.

“PMI data for January signalled that the Turkish manufacturing sector made a positive start to 2020. Renewed growth of new orders encouraged firms to accelerate the pace of output expansion, resulting in the need for additional staff,” Andrew Harker, associate director at IHS Markit, said.

The January PMI survey of Turkish manufacturing, compiled by the Istanbul Chamber of Industry and IHS Markit, produced a headline PMI above the 50.0 no-change mark for the first time in 22 months. In the first month of the year, it rose to 51.3 from 49.5 in December. New orders returned to growth and renewed hiring was signalled.

‘Modest improvement’
The reading overall signalled a modest improvement in business conditions in the sector, IHS Markit said. It added: “Improving customer demand led new orders to return to expansion in January. The rate of growth was modest, but the most marked since March 2018. New export orders also increased, ending a five-month sequence of moderation. Renewed rises in new orders led manufacturers to expand production for the third month running.

“As was the case with new business, the increase in output was the fastest in just under two years. The sharper rise in production meant that firms were able to continue reducing their backlogs of work in spite of the increase in new orders. Some firms used inventories to help meet new business, resulting in the sharpest decrease in stocks of finished goods since July last year.”

The PMI survey also recorded a rise in manufacturing employment for the first time in three months. Panellists linked hiring to the need for additional resources to work on new projects as well as business expansion plans.

“Purchasing activity increased at a solid pace, and one that was the fastest since February 2018,” HIS Markit said. “Despite this, stocks of purchases continued to be scaled back as inputs were used in the production process. Input prices rose at the fastest pace in six months at the start of the year, with respondents mainly linking the increase to ongoing currency weakness. That said, the rate of inflation was still below the series average. A similar picture was evident with regards to output prices, which rose at a modest pace, albeit one that was the fastest since June last year.”

The Polish economy will grow just 3.5% in 2020, said Poland’s biggest lender, the state-controlled PKO BP, trimming its previous forecast of 3.7%.

Ukraine retail sales grew by 12.5% year-on-year in real terms in January, keeping the same growth pace as in the previous month, the nation's state statistics service Ukrstat reported on February 20.