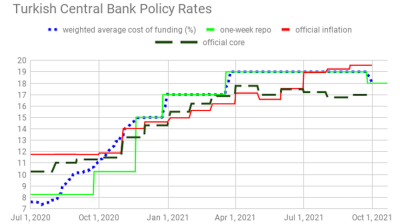 Nevertheless, Turkey’s central bank, which has essentially only taken note of the “core” figure since last month, has space for another 100bp policy rate cut at its next monetary policy committee (MPC) meeting, scheduled for October 21.

At the previous meeting, held on September 23, the policy rate was cut by 100bp to 18%, confounding market expectations.

If the policy rate is cut to 17%, then the “core” story will have been consumed.

In those circumstances, TUIK methodology might on November 3 cut the “core” for October ahead of another rate cut by the MPC on November 18. The last MPC meeting of 2021 is scheduled for December 16.

Upcoming rate decisions will depend on the course of the lira and the government’s available ammunition stockpile to defend the currency. It is hard to estimate how much in usable FX reserves the government has to hand.

After the September 23 rate cut shock, the lira reinforced its reputation as the world’s worst performing emerging market currency. Its latest all-time worst rate versus the USD stands at 8.9607, which was registered on September 29. The USD/TRY pair were on October 4 hovering in the mid-8.80s.

New records are on the way. The magnitude of the currency depreciation will be the main focus in the coming period.

Another result of the rate cut was that Turkish President Recep Tayyip Erdogan’s “contractors”—in other words, key contractors that have done well out of his regime—ended their strike on the same day it was announced.

Along with rate cuts, so-called “macro prudential measures” are also arriving in the form of limits on consumer loans and so forth. This has never worked in stopping lira depreciation and it will never work.

As of October 1, Turkey’s state-run natural gas importer Botas hiked prices of natural gas for industrial users and electricity power plants by 15%. The gas price for residential use remained unchanged.

Energy market watchdog EPDK also left electricity prices unchanged. Opposition parties speculated that the fact that no utility price hikes for residential use were announced was a result of their ongoing campaign to create awareness among the public over price hikes for utilities that are in the pipeline.

Sooner or later, prices will be increased, though.

On the global markets front, each month a commodity smashes records as there is too much liquidity surfing around organised markets. Currently, natural gas prices are booming, with some critics saying the situation has been triggered by Russia looking to blackmail Europe into hurrying up on the completion of the Nord Stream 2 pipeline. Next month, another commodity will prove record-breaking.

As of October 1, liquefied petroleum gas (LPG) prices in Turkey were also hiked. Tax reliefs were ended. Glassmaker Sisecam, meanwhile, pushed up its sale prices by around 20%.

As of October 4, Philip Morris increased its cigarette prices.

The noise in foreign policy behind the scenes is much about just what ails Erdogan? Let’s take a view. Turkey’s leader seems rather sick physically and is struggling, mentally, to keep on top of things. Some say he has entirely lost sight of reality. He reacts emotionally and mainstream media come across as like kids mocking an incapacitated person each time they headline his emotional reactions as serious policy moves.

At the end of the day, however, don’t forget that the Erdogan regime is in partnership with the Biden administration in the Afghanistan business. That keeps a couple of pegs hammered firmly into the ground.

Relations with Russia make little sense for Turkey despite the hubbub. However, for those who take a keen interest in the complicated Turkish-Russian relationship, in Syria expect Erdogan to pull his troops to above the M4 highway in the Idlib region.