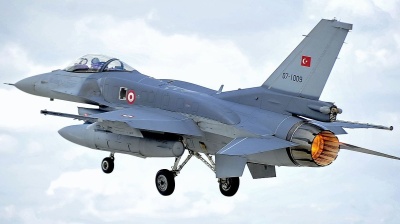 Turkey’s rivals, including Greece and Israel, are receiving F-35s, or generation 4.5 fighters like France’s Rafale, points out report author Can Kasapoglu, director of the security and defence programme at the Centre for Economics and Foreign Policy Studies (EDAM), warning: “If an intermediate solution is not found, Turkish air power will fall behind world trends.”

Nato member Turkey was thrown out of the F-35 development and manufacturing programme after failing to heed Washington’s warnings that it must not move ahead with the purchase of Russian S-400 anti-aircraft missile defence systems, which under Turkish deployment could, says Nato, pose a security threat to the performance data of the F-35 and other military hardware used by the Western defence alliance. The move means Turkey’s plans to acquire around 100 F-35s cannot move forward.

“Turkey and the Turkish Air Force's air warfare capabilities face a serious test over the next 10 to 20 years,” added Kasapoglu in his assessment of the situation.

Turkey has had some headline success in developing armed drones, especially the TB2 that featured in last autumn’s Nagorno-Karabakh ‘drone war’, but Kasapoglu argues that armed drones are no substitute for the F-35 or manned aircraft.

“Although there is a potential for change within the scope of artificial intelligence and algorithmic warfare, air warfare parameters are still shaped around manned platforms,” he noted.

The Turkish Navy’s plans for an amphibious assault ship, or light aircraft carrier, reckoned with the provision of short-takeoff and vertical landing F-35Bs. Lately, Turkey has been exploring the possibility of developing a ‘drone carrier’ instead.

The pro-Erdogan administration media in Turkey is, meanwhile, wont to big up the TF-X project to develop a homegrown fifth generation stealth fighter by 2029. But there is no sign of that deadline being realistic. Turkey faces major problems in finding a suitable engine from an overseas manufacturer.

Nevertheless, Turkey’s top defence procurement official, Ismail Demir, said in an April 30 Turkish TV interview that the government will prioritise the production of the indigenous TF-X.

Turkish Aerospace Industries (TAI) is designing, developing and will build the TF-X. TAI CEO Temel Kotil said in an April 27 TV interview that “the government has earmarked an additional $1.3 billion to Phase 1 of the TF-X programme. A total of 6,000 engineers are working on this programme.”

He added: “My [top priority] is the TF-X program. It definitely has to be done.”

Also frowning on the lack of an advantage that having the S-400 surface-to-air missiles offers Turkey, Kasapoglu said: “Turkey's defense planning and national security requirements, are not suitable for a SAM-intensive force structure. The S-400 strategic SAM system, which has just entered the inventory of the Turkish Armed Forces, will not perform at the desired level due to the shortcomings in the network-centered architecture.”

“Turkey,” concluded Kasapoglu,” should return to its priority the F-35 program. The mentioned policy advice is of great importance both for the combat capabilities of the Turkish Air Force and for the technological and economic gains and employment capacity of the Turkish defense industry.”