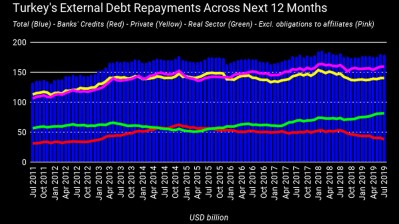 Turkish private lender Akbank, owned by conglomerate Sabanci, has obtained an $810mn-equivalent and 367-day syndicated loan in two tranches of $402mn with an all-in cost at Libor+2.25% and €373.5mn at Euribor+2.10%, it said on October 8 in a stock market filing.

The renewal rate of the syndicated loan stood at 83%, according to Reuters’ calculations.

On September 3, an Akbank spokesman told Bloomberg that the lender was offering a 185bp margin on the USD tranche and 170bp on the EUR portion, lower than the Libor+200bp and Euribor+190bp obtained in March.

Turkish lenders’ syndicated loan renewal costs fell in the spring season of this year after booming in the autumn season of 2018 following the country’s currency crisis that peaked in August.

However, the renewal ratios are low, the costs remain higher than the pre-crisis costs and two-year maturities have disappeared despite positive headlines on Turkey’s progress with its economic recovery dominating media reports.

Along with Akbank, Isbank, TEB and Vakifbank were also in the market. Each bank was expecting a margin cut, Global Capital reported on October 3 in a story entitled “Turkish banks achieve tighter pricing in refi round”.

On October 8, the publication reported in a story entitled “Trump Turkey tweets impact ‘muted’” that US President Donald Trump’s Twitter salvo, warning Turkey that he could obliterate its economy if Ankara went too far with its planned incursion into northeastern Syria, only had a muted effect on the Turkish curve, with investors' scepticism towards Trump growing.

Yapi Kredi Bank has a syndicated loan worth around $1bn due in October.

According to the latest central bank data, Turkey’s overall external debt repayment obligations for the next 12-month period stood at $179.2bn at end-July.

The figure stood at a record high of $185.9bn at end-February 2018 but declined to $173.9bn at end-October 2018 as a result of the ‘curing’ effect of the August currency crunch. But a significant recovery in Turkey’s external financing needs has not been observed since then.

When lenders’ and corporates’ obligations to their branches and affiliates abroad are excluded, Turkey was obliged to repay $159bn in foreign debts across the next 12 months as of end-July, up from $155.3bn as of end-2018.

The data suggests that Turkish banks have been transferring their external debt weight to the real sector, but Turkey’s overall exposure has not shown an improvement since the sharp decline in October 2018.