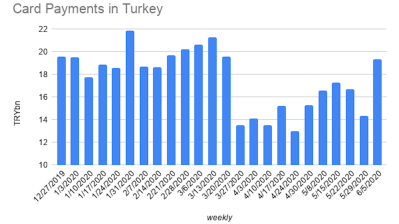 Credit card and debit card payments in Turkey rose to a value of Turkish lira (TRY) 19.3bn ($2.8bn) in the country’s first ‘post-lockdown’ week (ending June 5), according to latest data from the Central Bank of the Republic of Turkey (CBRT).

That’s the highest level seen since TRY19.6bn was recorded in the week ending March 20.

Turkey officially confirmed its first coronavirus (COVID-19) case on March 11 but initial measures to curb the virus outbreak only arrived with a two-week lag. As a result, the first impact of the health and economic emergency on card payments—a sign of real consumption in the country—was felt in the week ending March 27 when the total value of such transactions fell sharply to TRY13.5bn.

The lowest volume was registered in the week ending April 24 at TRY13bn.

Turkey reopened restaurants and beaches and ended travel restrictions on June 1 after reopening shopping malls on May 11.

In April, the government launched a campaign to delay repayments on credit card and other bank debts for a three-month period. Private lenders have joined the state lenders in conforming with this.

Finance Minister Berat Albayrak stated on April 12 that state lenders had postponed TRY60bn worth of loan and credit card debt repayments, while calling on private banks to also offer delays. Eventually, they did.

In April, 38,000 Turks used a credit card for the first time. There were 71mn credit cards and 168mn bank cards in the country of 83mn people as of end-March, according to latest data from the Interbank Card Center (BKM).

In the week ending June 5, expenditures on supermarket items was the top category for card payments, accounting for 21%, or TRY4.1bn, of such payments. The weekly data is volatile but consumers in Turkey appear to have spent TRY4-5bn per week via card transactions on supermarket items since the beginning of March when COVID-19-driven stockpiling began, up from the TRY3.2bn average seen across the first quarter of the year.

There was TRY1.9bn of card spending on consumer electronics in the week ending June 5, up from TRY1.3bn a week ago. The government has been hiking import tariffs on this product category since April but it hasn’t managed to stop Turks buying imported electronics.

The rolling four-week average of credit card purchases, an indicator with a strong correlation to domestic demand, is barely catching up with levels seen a year ago, Bloomberg reported on June 16.

Data collected by Google show Turks have proved reluctant to return to offices or go out since the pandemic restrictions were lifted from late May.

“It is now commonplace to cite data on everything from traffic congestion to port arrivals. However, it is important to understand what these data do and don’t tell us,” Neil Shearing of Capital Economics wrote on June 15 in a note entitled “Tracking the recovery”.

“They are clearly narrow in their coverage and fail to capture activity in key sectors. What’s more, they tell us almost nothing about the state of demand, which will be critical to determining the scale and speed of the economic recovery. More car journeys do not necessarily translate into more consumer spending,” he added.

So, for Turkey, the card payment data may be more instructive than Google activity data when trying to get an idea of trends in private consumption.

In Turkey’s specific situation, the official data certainly does not reflect the realities people are contending with, though opposition politicians’ attempts to address this matter have been rebuffed by the ruling coalition.

In the recorded second quarter to date (from April 1 to June 5), card payments totalled TRY155bn. A lower figure of TRY153bn was seen in Q2 2016, but the remaining 25 days are awaited for ascertaining the overall Q2 2020 figure.

According to a new survey by Ipsos, the economy is once more seen as the biggest difficulty by Turks. It’s the first time that this has been the case since Turkey’s COVID-19 outbreak occurred in March. A total of 43% of survey respondents saw the economy as the biggest problem, while 39% said the pandemic was the greatest difficulty. The survey also found that 33% of respondents were employed by workplaces that have temporarily ceased operations. The reopening of the economy amid the ongoing COVID-19 outbreak was seen by 48% of respondents as the wrong move, while 41% saw it as correct. A total of 57% of survey participants said they were still anxious about their job.

On June 12, Switzerland-based testing and certification provider SGS said that the Turkish Tourism Promotion and Development Agency (TGA), under the Turkish Ministry of Culture and Tourism, had given it authorisation to serve as a certification body for Turkey’s “Safe Tourism” certification programme. Given the considerable doubt over how far Turkey actually has progressed in overcoming its coronavirus outbreak—Germany, for instance, is maintaining its travel warning on Turkey until it is satisfied that enough progress has been made—the programme is off to a sticky start.

On June 15, Moody’s Investors Service said that it had downgraded Turkey’s flag carrier, Turkish Airlines, to B3, six notches below investment grade, from B2.

Moody’s has not released a rating action on Turkey (B1/Negative) since June 2019, but its comments on Turkish Airlines included some insights on how it sees issues surrounding the revival of economic activities in the country.

The rating agency expects the pandemic to significantly curtail global demand for air travel for an extended period. Moody's also assumes in its ‘faster recovery model’ that Turkish Airlines' 2020 passenger traffic will fall by around 60% y/y. In its ‘slower recovery model’ the drop is anticipated at 70% y/y. The scenarios also project that the airline’s revenues and the demand it encounters will only approach 2019 levels in 2023.

The risk of even more challenging downside scenarios remains high, however, and the severity and duration of the pandemic and required travel restrictions also remain highly uncertain, particularly given the threat of an increase in the number of infections as social distancing practices ease.

The intensity and length of the pandemic and the associated travel restrictions globally have proved greater than what Moody's assumed in its base case at the time of a March 24 rating action, when it downgraded Turkish Airlines to B2 from B1. At that point, it was assumed by the rating agency that Turkish Airlines' passenger traffic would decline 20% y/y in 2020.

The seasonally adjusted IHS Markit Russia Services Business Activity Index registered 47.8 at the end of the second quarter, up notably from 35.9 in May, Markit said in a press release on July 3.

Global tourism sector set to lose between $1.2 trillion and $3.3 trillion depending how long travel restrictions last, the UN’s trade and development body forecast.

Foreigners bought €169.99mn of property in the tiny Adriatic country in 2019.

Net foreign direct investment leaving Ukraine in 1Q20
14 hours ago
Russia Services PMI bounces back to 47.8 in June, up from 35.9 in May
2 days ago
Croatia to be among countries worst hit by tourism collapse this year, says UNCTAD
3 days ago
Russians, Serbians, Turks the biggest property buyers in Montenegro
3 days ago
Polish PMI advances but remains below 50 points as restrictions lifted
4 days ago