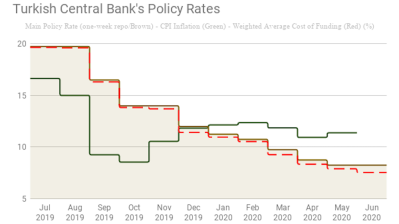 Ahead of the decision to leave the one-week repo rate at 8.25%, 18 out of 20 analysts polled by Bloomberg predicted more easing, with 12 pencilling in a 25bp reduction and five others a 50bp cut.

“If we take into account that real interest rates are already deep in negative territory due to persistently high inflation, today’s decision is actually fully rational,” Piotr Matys, a strategist at Rabobank in London, was quoted as saying by the news agency. “The key question is whether it is a pause in the easing cycle or the end of it.”

Another consideration is that Turkey’s national lender has been lending at below its policy rate. As of June 24, the weighted average cost of central bank funding stood at 7.54%.

The Turkish lira (TRY) has looked increasingly vulnerable to a global selloff, with the central bank having delivered 1,575bp of easing in nine consecutive steps since President Recep Tayyip Erdogan in July last year fired its governor for being too slow in bringing in cuts. The aggressive easing cycle left Turkey’s inflation-adjusted rates among the lowest in the world. The lira is one of this year’s five worst performers in emerging markets with a loss of about 13% against the dollar. The lira hardly budged from around 6.85 to the USD throughout June 25.

In a note to investors, Jason Tuvey at Capital Economics said: “Turkey’s central bank unexpectedly left interest rates on hold today and it’s difficult to see how economic conditions will change in such a way over the coming months to justify renewed easing. We now expect rates to be left on hold over the rest of this year and next. If anything, given Turkey’s large external debts and vulnerability to renewed financial market turbulence, the risks are skewed towards rate hikes.”

He added: “The decision to keep rates unchanged seems to reflect concerns about last month’s rise in inflation. The headline rate edged up from 10.9% y/y in April to 11.4% y/y in May as the effects of previous weakness in the lira more than offset downward pressure on prices from the [coronavirus-driven] slump in demand. The recovery in global commodity prices is likely to have also increased concerns about the inflation outlook.

“In addition, policymakers may have been encouraged by signs that economic activity in Turkey, and globally, is recovering relatively quickly. Activity data for April confirmed that Turkey had experienced one of the steepest downturns in the region and the wider emerging world. But as virus-related restrictions have been lifted, daily indicators point to sharp rebound in activity over the past month. Against this backdrop, the MPC may have concluded that further monetary stimulus is no longer warranted.” 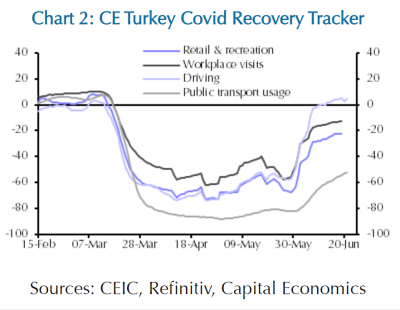 In the back of policymakers’ minds

The sharp sell-off in the lira earlier in the year may have also been in the back of policymakers’ minds, said Tuvey, noting: “The lira fell to a record low in early May and, at one stage, Turkey appeared to be heading for a re-run of the 2018 currency crisis. Only when Qatar came forward with financial support—tripling its currency swap line with Turkey from $5bn to $15bn—did pressure on the currency subside.”

The ongoing rebound in energy markets now “adds upward pressure from here” on inflation, according Barclays economists including Ercan Erguzel, who were predicting a 50bp rate cut conclude the easing cycle. Turkey is almost entirely dependent on imports to meet its energy needs.

In its statement on holding the benchmark rate, the MPC said it expected the effect of the pandemic on the supply side to fade while “demand-driven disinflationary effects will become more prevalent in the second half of the year”.

Tuvey concluded that there was “a significant risk of another sell-off in the lira that prompts talk of interest rate hikes to come on to the agenda. After all, Turkey’s large short-term external debts leave the lira vulnerable to bouts of risk aversion. Some kind of political event, such as renewed tensions with the US, seems to be the most likely trigger for renewed volatility in Turkey’s financial markets.

“Overall, the most likely scenario is that interest rates are left on hold over the next couple of years. Our main concern is that, similar to the aftermath of the global financial crisis, the CBRT [Cent]ral Bank of the Republic of Turkey] keeps policy too loose for too long that over time leads to a fresh build-up of macro imbalances and strengthens the case for monetary tightening. But this is a story that is unlikely to play out for at least a few years.”

Several countries in Central Asia, the South Caucasus and the Western Balkans are seeing a strong rise in daily new cases after the easing of restrictions.