Turkey’s CPI up less than expected to 10.56% in November leaving real interest rate at 3.44% 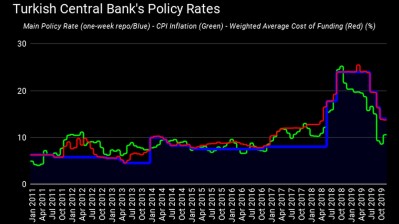 Turkey’s official annual consumer price index (CPI) inflation moved up less than expected to 10.56% in November from 8.55% in October. The outcome raised expectations for a sizeable rate cut by the central bank at its next monetary policy committee meeting on December 12. That’s despite inflation having risen from its near three-year low and monetary easing having already seen 1,000 bp taken off the benchmark interest rate since July.

The November gain in inflation comes following an October figure which stemmed from strong base effects seen following inflation’s leap to a 15-year high of 25% a year ago in the wake of the Turkish lira crisis. Jason Tuvey, senior emerging markets economist at Capital Economics, said the November number likely marked the start of a steady upward trend over a couple of years.

“This won’t prevent the central bank from cutting interest rates further at the next couple of meetings, but we think that it will be forced to reverse course around the middle of next year,” he said, adding that he expected inflation to reach 15% by end-2020.

The Central Bank of the Republic of Turkey (CBRT) says its monetary stance is shaped to leave a “reasonable” real rate. Its key rate presently stands at 14%, thus held against November inflation, the real rate stands at 3.44%, still one of the highest rates compared to Turkey’s emerging market peers.

The inflation data was published the day after it was announced that the third quarter saw recession-hobbled Turkey return to the growth path on an annual basis.

“Easy part is now over”

Year-end inflation expectations have been revised down to around 11.5%, Hilmi Yavas, an economist at Yatirim Finansman, was quoted as saying by Reuters. Yavas added that the central bank could cut up to 200 bp at its upcoming monetary policy meeting. “Compared to 2019, it will be harder for inflation to fall from now on,” he said, adding that it would fluctuate around 10% in 2020. “The easy part is now over. From now on, for us to see a permanent fall in inflation, it needs to be brought down structurally.”

In a note to investors on the inflation figures, Timothy Ash at BlueBay Asset Management said: “Largely as expected because of base effects, with headline slightly lower than expected but core higher. Makes for difficult decision by the CBRT on Dec 12.” 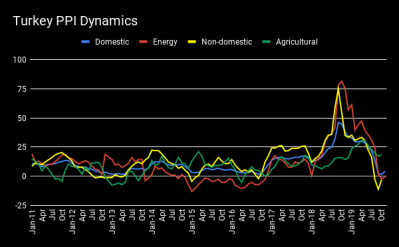 Finance Minister Berat Albayrak said recent stability in the lira and lower imports helped “maintain the positive outlook in inflation”. The situation showed Turkey could end the year below its inflation target of 12%, he added. 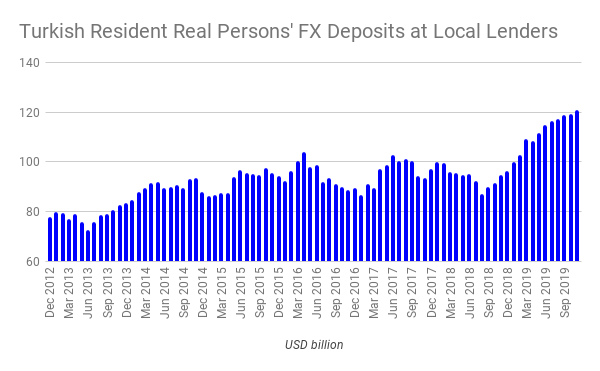 The government has forecast inflation at 8.5% at end-2020. The central bank has estimated the figure will be 8.2%.

Other takeouts from the TUIK November inflation data showed food inflation rose to 8.9% from 7.9% the previous month, staying below the central bank’s year-end forecast of 10% after testing above 15% for much of the year; the core index, stripping out volatile items including food and energy, rose to 9.3% from 6.7%; and retail prices in Istanbul, the country’s largest city and commercial capital, increased 1.1% m/m. 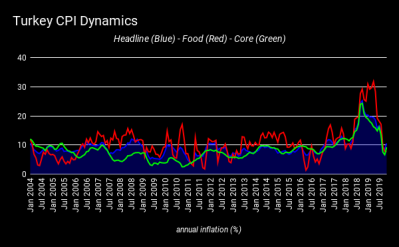 Bloomberg reported that Morgan Stanley expected another inflation pick-up in December,
to 11.3%. It also saw interest rates remaining in double digits through 2020.

Romania's industrial production index increased by 13.4% y/y in March but this was largely a reflection of the lockdown enforced in March 2020.

Serbia’s inflation speeds up to 2.8% y/y in April

Inflation in Serbia has been speeding up gradually since the beginning of the year.

Growth to be driven by domestic consumption while a negative contribution is expected from net exports.