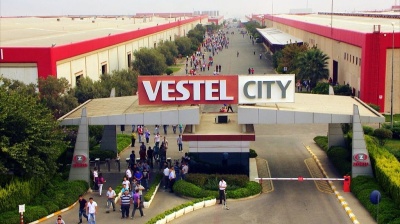 Turkish industry has been rebounding but the road ahead might not be straightforward (pictured is the Vestel home and professional appliances factory in Manisa, western Turkey).
By bne IntelIiNews September 14, 2020

Figures covering more recent periods, such as data on the latest consumer sentiment and manufacturing purchasing managers’ index (PMI), suggest that the recovery continued in August, but with the Turkish lira (TRY) once more embattled at fresh all-time lows there has been a recent backdoor tightening of monetary conditions that may have caused the pace of growth to slow. Further sell-offs of the lira would expose Turkey’s recovery to even greater difficulties.

The 4.4% gain year on year was stronger than the market consensus expectation for 3%. Month-on-month, industrial production was up 8.8% in July on a calendar and seasonally adjusted basis, the Turkish Statistical Institute (TUIK) data also showed. 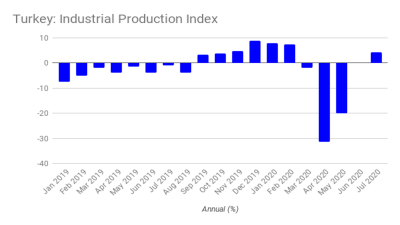 Turkey’s first officially recorded coronavirus infection was reported on March 11. Soon after many factories stopped operations. Industrial production sank 31.4% in April and 19.9% in May before edging up 0.1% in June. The month-on-month rise in June was logged at 17.8%.

The breakdown of the latest data showed that manufacturing output continued to recover, rising by 5.1% y/y in July. Manufacturing of metals, electrical equipment and machinery grew strongly in the month, while the fall in auto production eased from 20.2% y/y in June to 5.3% y/y in July.

The news from the retail sector was even more encouraging, Capital Economics noted. “Sales rose by 9.5% m/m in July following an increase of 18.0% m/m in June. In year-on-year terms, retail sales rose from 0.4% in June to an impressive 11.9% in July, which left the level of sales only 2.0% below its pre-virus peak in February. Non-food retail sales rose strongly, driven by a 27.7% y/y in sales of audio and video equipment, household appliances and furniture and a 13.8% y/y rise in sales of computers, software and telecommunications equipment,” it said.

“On a 3m/3m basis, which aligns with quarterly GDP growth, the economy has recovered strongly from its trough in Q2 as industry expanded by 3.0% in July while retail sales fell by only 0.1%,” added Liam Peach at Capital.

In a note on the industrial production data, Muhammet Mercan, ING chief economist for Turkey, said: “Overall, industrial production continued to recover in July, though the breakdown of manufacturing suggests an uneven performance, with some sectors still struggling after a stronger and swifter than expected recovery since the reopening of the economy. Recent moves by the Banking Regulation and Supervision Authority and the Central Bank of Turkey have helped to improve momentum but how the laggards perform through the rest of the year will be important for the recovery process.”

World must tell Turkey to “get out” of Caucasus says Armenian PM
Are the Caucasus energy assets in danger from a war in Nagorno-Karabakh?
Turkey denies Turkish F-16 jet shot down Armenian plane over Armenia

Russian corporate profits continue to recover, and caught up with 2019 earnings in July

Russian corporate profits are maintaining their recovery and on a cumulative basis continue to claw back ground lost in the second quarter during the worst of the coronacrisis. Monthly corporate profits were back at the same level they were in July.