Turkey’s lira ends day at 6.99 as markets bet on where rally goes from here 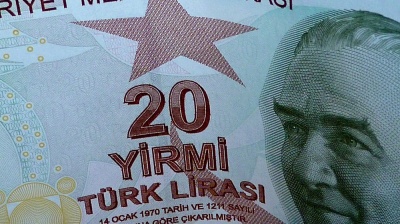 Last November, lira watchers were wondering when it might jump above 10 to the dollar. This week, they've seen it shoot below seven. / jon smith, Stamford, England. CC SA 2.0 Generic.
By bne IntelIiNews February 16, 2021

The Turkish lira was trading at 6.99 versus the dollar by the end of February 16 (Istanbul time, three hours ahead of GMT) as markets pondered how much stronger than 7.00 to the USD the currency might go in what has been a world-beating rally since Turkey’s central bank abruptly switched to monetary tightening last November with the country poised on the edge of another balance of payments crisis.

During the day’s trading, the Turkish lira (TRY) at one point took its gains as far as 6.88. Since the rally began, the TRY has outperformed all other emerging market currencies, strengthening by around 23%. Before this latest breakthrough to below 7.00, it was last below that level in early August.

Henrik Gullberg, a London-based economist at Coex Partners, told Bloomberg valuations could become stretched if the currency climbed to 6.85 or 6.9 per dollar, though there was the potential for a brief overshoot to 6.3.

“If the broader environment remains supportive of risk sentiment, which I believe it will be, and the CBRT [Central Bank of the Republic of Turkey] is allowed to maintain its more conservative policy approach then I think the lira will continue to appreciate,” Gullberg said.

The central bank holds its next rate-setting meeting on February 18, having hiked the main policy rate to 17% from 10.25% in the past four months. Its governor has signalled that there will be no rate cut, despite Turkish President Recep Tayyip Erdogan—who has fired two central bank chiefs in the past couple of years—in recent weeks continuing to voice his unorthodox theory that high interest rates cause inflation. The prevailing view appears to be that even though Erdogan sets out to save face by continuing to vociferously stick by his objections to high borrowing costs, he will not, for now, interfere with monetary policy as he is all too aware of the fragility of Turkey’s attempt to reboot its currency and economy. How long he will maintain his patience amid the pain high rates are inflicting on the electorate is the question.

With the government facing high short-term financing needs, “there is much less room for Turkey to manoeuvre than in prior years”, Phoenix Kalen, the London-based director of emerging markets strategy at Societe Generale, said, adding that the pace of the lira’s gains will probably slow down.

Timothy Ash at BlueBay Asset Management noted that prior to Erdogan shaking up his economy team, appointing a new central bank governor and finance minister, “it seemed only a matter of time before it [the lira] would hit 10”.

“People were focused on 7 as a key support level as I think they assumed the CBRT would use that nice round level to begin rebuilding FX reserves. But the absence of dedollarisation from locals seems to be holding [central bank governor Naci] Agbal back and thus is giving added confidence to foreigners to buy lira”, he added, also remarking that it was “amazing to hear people talking about 6.3 as a possible target”.

HSBC Holdings sees the lira at 6.5 per dollar by year-end, signifying a 7% increase from its current level.

Last year, the central bank burnt through more than $100bn of Turkey’s foreign reserves in a failed attempt at supporting the sinking currency while simultaneously maintaining lower interest rates.

On February 15, Turkey's government recorded a January budget deficit of TRY24.15bn, compared to a surplus of TRY21.5bn a year earlier, when the central bank transferred 40bn lira ($5.7bn) to its majority shareholder, the treasury, in advance. This year the bank did not make the transfer in advance.

RBI's 2022 profits soar to €3.6bn, with Russian operations representing more than half
Romania gets European Commission’s green light for €1.6bn investment and development bank
M&A in Emerging Europe fell by 20% to €32.93bn in 2022