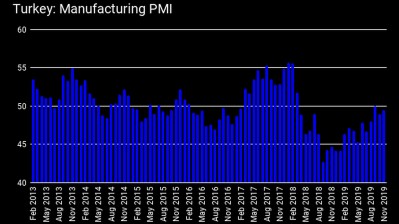 Turkey’s headline manufacturing purchasing managers’ index (PMI) remained in contraction territory in November but there was “only a marginal softening of business conditions in the sector” amid signs of improvement, data compilers Istanbul Chamber of Industry and IHS Markit said on December 2.

The November survey results showed PMI rose to 49.5 in November from 49.0 in October, nearing the 50.0 no-change mark.

Commenting on the Istanbul Chamber of Industry Turkey Manufacturing PMI survey data, Andrew Harker, associate director, IHS Markit, said: “The key highlight from the latest PMI survey was a return to growth of production for the first time in over a year-and-a-half. Although only fractional, the rise demonstrates improved confidence among firms that market conditions are on an upward trajectory. Based on the relationship between the PMI and official industrial production data, we should be looking at year-on-year growth in production when November figures are released.”

The survey conclusions also showed new orders moderated at a softer pace as client demand remained fragile, but the rate of input cost inflation slowed to the weakest since January 2015, with manufacturers lowering their selling prices for the third month running.

Manufacturing ompanies scaled back their workforce numbers in November following expansions in each of the previous two months, the PMI data further showed.

IHS Markit added in a press release on the latest PMI data: “A number of panellists continued to report upwards price pressures as a result of currency weakness, but this was much less of an issue than this time last year. A combination of softer cost inflation and competitive pressures led manufacturers to lower their output prices for the third month running, with the pace of reduction broadly similar to that seen in October. Finally, purchasing activity stabilised in line with production requirements, thereby ending a 19-month sequence of moderation.”