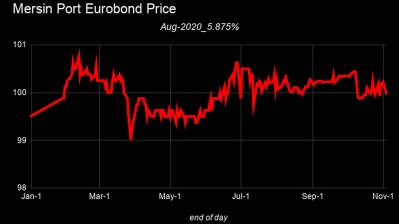 Investor meetings will be held in Singapore, Hong Kong and the US.

Turkey’s flag carrier Turkish Airlines is also in the debt market. It was reported last month that the airline has mandated lenders for an international bond issue.

MIP will finance its $450mn worth of outstanding eurobonds due August 2020 (XS0957598070) and plans to use the remaining sum from the new issue for operations, according to Reuters.

Singapore's PSA International controls 51% of MIP while Australia’s IFM Investors has a 39% stake and Akfen Holding of Turkey owns the remaining 10%.

PSA-Akfen placed a winning bid of $755mn in 2005 to operate Mersin port, located on the eastern Mediterranean coast, for 36 years. It took over the port in May 2007.

The port handled 1.43mn twenty-foot equivalent units (TEUs), up 16% y/y, in January-September while MIP increased its net income to $68mn in H1 from $54mn a year ago.

In September, MIP said its eurobonds, listed on the Irish Stock Exchange, had become callable at par and that it was “closely monitoring opportunities to refinance the notes in the capital markets in the available financing windows between now and the maturity date”.

Last month, Turkish markets watchdog SPK’s weekly bulletin showed that MIP had received approval to issue up to $650mn worth of eurobonds.

At issuance, the paper was provisionally rated investment grade by both Moody’s Investors Service (Baa3) and Fitch Ratings (BBB-).

It was recorded as Turkey’s first ever infrastructure bond issue. The European Bank for Reconstruction and Development (EBRD) bought $79.5mn of the paper.

“As of end-December 2018, MIP's cash on balance sheet amounted to some $93.4mn, of which only $1.4mn was held in Turkish placements. This reflects MIP's policy to hold a limited amount of cash within the local banking system to cover day-to-day costs of operations and to convert revenues received in Turkish lira into USD on a regular basis,” said Moody's. The rating agency also noted that, in addition, MIP held a $270mn receivable against its shareholders.

Notwithstanding a strong operational performance, MIP's expected cash flow generation combined with available foreign currency deposits would not be sufficient to fully cover its $450mn bond, due in August 2020. While this exposes MIP to a refinancing risk in more volatile financial markets, Moody's has positively factored in as mitigating factors the company's strong free cash flow generation combined with the presence of a strong shareholder—PSA International Pte Ltd (Aa1 stable), which owns 51% of the company's shares, and has provided operational support to MIP under its ownership.

On November 3, Fitch said it had assigned MIP's prospective issue of USD-denominated senior unsecured debt an expected rating of 'BB-(EXP)' with a Negative outlook.

The assignment of a final rating is contingent on the receipt of final documents conforming to information already reviewed.

MIP's competitive market position in its catchment area and strong connectivity to the hinterland mitigate the volatility of its domestic and export market, in Fitch's view. MIP's weak, single bullet debt structure weighs on the rating, although in Fitch’s view the refinancing risk associated with the bullet bond is mitigated by relatively moderate leverage for the rating.

“The rating is capped by Turkey's Country Ceiling at 'BB-'.The Negative Outlook reflects that on the Turkish sovereign rating,” Fitch also said.

Someone needs to inform Fitch that it said on November 1 that it had upgraded Turkey’s outlook to Stable from Negative while maintaining its rating at BB-.

Fitch’s sovereign outlook upgrade was seen as rather surprising by market players.

“Although Turkey is at war and under threat of sanctions from the US and governed by an intemperate Old Testament theocrat… Fitch decided Turkey's medium-term economic future was stable and upgraded accordingly. This combined with yet another suspiciously dovish inflation release for Oct militates for one more significant rate cut before year-end. CPI annualised 8.55% and leaves Turkey's rates positive to the tune of about 5.5%. The next MPC is Dec [12] but I wouldn't be buying the mkt regardless. Too much $hit flying round,” Julian Rimmer of Investec said on November 4 in a note to investors.

Also eye-catching was how Fitch borrowed from the Turkish government’s domestic economy views in its rating rationale, stating: “Turkey has continued to make progress in rebalancing and stabilising its economy, leading to an easing in downside risks since our previous review in July.”

Getting back to Fitch’s comments on Mersin Port, it sees the port operator’s Exposure to Volatile Markets—Revenue Risk (Volume) at Midrange.

Located in the Cukurova region, MIP is Turkey's largest port by import/export container throughput and a major player in terms of container throughput. There are no regulatory requirements on increasing capacity at the port. Capacity currently stands at 2.6mn TEUs.

Foot traffic at Russia’s leading malls jumps as rebound gets underway
11 hours ago
Armenia’s coronavirus plight worsens with more than 1,000 more infections in two days
20 hours ago
Authorities “may be sowing seeds of Turkish economy’s downfall” by pumping money at fastest rate for more than decade
22 hours ago
Turkey’s electricity consumption collapses 17% in May
2 days ago
Russian government presents National Recovery Plan to President Putin
2 days ago