Will it be a case of "Hold on tight" for Turkey's central bank from here on in?
By bne IntelIiNews July 23, 2020

Turkey’s central bank held its policy rate steady at 8.25% for a second consecutive month on July 23, meeting the widely-held market expectation. It said that there was a risk of inflation overshooting its year-end projection.

The key interest rate stands well below Turkey’s official annual inflation rate, which moved up to 12.6% in June, leaving real rates in negative territory. The central bank trimmed its year-end inflation forecast to 7.4% in April, but analysts said it appeared that the regulator would revise its forecast higher in its next inflation report, due on July 29. 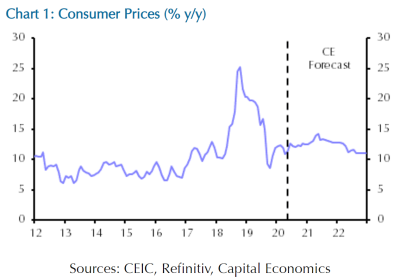 Assessing the latest Turkish rates decision, Jason Tuvey at Capital Economics, said: “We think that rates will now be left on hold for the next couple of years. But given high rates of inflation as well as the lingering threat of renewed falls in the lira, the risks are skewed towards tighter policy.”

The central bank has lowered its benchmark rate by a cumulative 1,575bp between July last year and May, but hit the brakes at its previous rate-settng meeting.

“The recent rise in inflation appears to be the overriding factor behind the central bank’s decision to refrain from further stimulus,” added Tuvey. “Indeed, in the accompanying statement, the monetary policy committee acknowledged that the ‘the risks to the end-year projection are considered to be on the upside due to recent realisations of inflation’.”

Analysts said the effects of falls in the Turkish lira—the currency hit a fresh all-time low against the dollar in early May—were, along with the recovery in oil prices, partly to blame for the recent jump in Turkish core inflation, which rose from 10.3% y/y in May to 11.6% y/y last month.

It’s become increasingly clear recently that the central bank is intervening to keep the lira close to 6.85/$ and “the central bank may have felt that lowering interest rates further would undermine its efforts to keep the currency stable”, Tuvey also said.

Piotr Matys, senior emerging markets forex strategist at Rabobank, was cited by Reuters as saying that as the economy recovers, people will be willing to spend more, which would lead to an increase in demand-driven inflationary pressure.

“If Turks are more confident, if unemployment stops rising and people feel more secure about their jobs then they will start spending money again. That would prevent inflation from falling,” he said.

The central bank is showing more confidence that the economy is delivering sufficient momentum to carry it past the sharp downturn that began after the coronavirus (COVID-19) crisis struck Turkey in mid-March. The national lender said a recovery started in May and was “gaining pace,” with the tourism industry likely to see a “partial improvement” now that some of the travel restrictions are being lifted.

Sebastien Barbe, the Paris-based head of emerging market research and strategy at Credit Agricole, was quoted by Bloomberg as warning that the return of Turkish current account deficits should “eventually alter the market perception” of the lira, especially with macroeconomic risks rising as inflation accelerates.

“The reflationary policy, with credits to the economy having accelerated to their highest level since 2015 in real terms, is also fueling external imbalances,” he said before the rate announcement. “From the central bank point of view, it may make sense to be wary about those macro-imbalances and the FX and to keep the policy rate stable once again.”

The lira has weakened 13% against the dollar this year.

Ratings agencies serve warnings to Turkey in lira battle, officials told to stop “muddling through”
BEYOND THE BOSPORUS: The lira hits the canvas
Turkey’s money markets starting to malfunction say analysts with lira back beyond seven-to-dollar