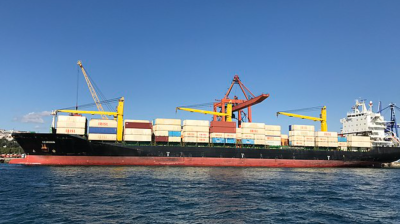 Warehouses at ports in Turkey are packed full with goods bound for Russia, Dunya daily reported on August 4, citing people in the logistics industry.

Turkey has become a busy transit hub for Russia’s imports as Moscow attempts to work around sanctions imposed by the US and Europe in response to its invasion of Ukraine, the Turkish newspaper reported. Ankara has not imposed any war sanctions on Moscow. The Erdogan administration argues that it must stay on good terms with both Ukraine and Russia in order to serve as a trusted intermediary in peace talks when the call comes, while it also baulks at the economic damage that would be caused to Turkey by the introduction of Turkish sanctions on its big Black Sea maritime neighbour to the north. However, the speculation in Washington is that the Biden administration was considerably irked by Turkish President Recep Tayyip Erdogan’s appearance alongside Russian counterpart Vladimir Putin and Iranian counterpart Ebrahim Raisi in Tehran just over two weeks ago and is also wary of Nato member Turkey turning into an anything-goes bolthole for Russians looking to shield business and assets from Western sanctions.

On August 2, the US Department of the Treasury, imposing a new round of sanctions targeting Kremlin-connected elites who provide substantial revenue to the Russia, hit Turkey’s MMK Metalurji with sanctions. The company owns two steel facilities in Turkey, as well as a seaport in Hatay, Dortyol. “MMK Metalurji was designated pursuant to E.O. 14024 for being owned or controlled by, or having acted or purported to act for or on behalf of, directly or indirectly, [Russian parent company] MMK, a person whose property and interests in property are blocked pursuant to E.O. 14024,” the US Treasury said.

Cargoes arriving from around the world are unloaded at Turkish ports and switched to Turkish ships heading for Russia after “embargo screening,” according to the Dunya article. The goods are sent on without being registered as imports to Turkey, it added.

The newspaper article comes as Erdogan prepares to meet Putin once more, on August 5 in the Russian Black Sea resort of Sochi.

Also according to the publication, to smooth goods flows to Russia, some Russian firms are opening offices in Turkey and entering into partnerships to carry out trade. It is possible for Russian business people can buy real estate and create a local company to obtain Turkish citizenship. They can then send products to Russia from the European Union and Far East via their new Turkey office address.

The shipments to Russia are often made by Turkish container companies, mostly by sea, with global giants such as Maersk, Hapag Lloyd and Hamburg Sud having ceased transporting goods to Russia. Land, air and rail routes are also reportedly used.

“I was in [the southern port of] Mersin last week. Due to the loads coming from all over the world and to be transferred to Russia, the warehouses in Mersin are full to the brim,” Mehmet Serkan Erdem, Turkey general manager of Rif Line, was quoted as saying, adding: “In some instances, these cargoes are sent to Russia with the ships of Turkish ship owners, and in others many Russian trucks are coming to Turkey to transport these goods.”

Erdem claimed many EU companies have been buying goods from countries such as China and Indonesia and sending them on to Russia via Turkey.