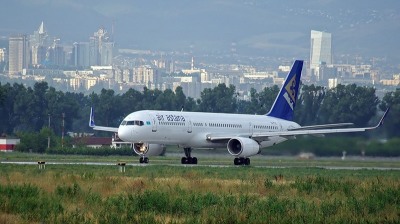 The airport is located around 15km from commercial capital Almaty, itself about 430km from the Chinese border.
By bne IntelIiNews May 8, 2020

Turkish airport operator TAV said on May 6 that it has signed a share purchase agreement to buy Almaty International Airport, seen as the main aviation gateway into Kazakhstan.

Istanbul stock exchange-listed TAV added that it, along with consortium partner VPE Capital, would pay $415mn for 100% of the shares in the airport. Almaty International Airport will become the 15th airport in TAV’s global network.

"TAV Airports’ share of the consortium will be no less than 75%, and the share transfers will take place upon closing with the completion of all legal prerequisites and procedures," TAV said in a press release.

Located in southeastern Kazakhstan around 15 kilometres outside the country's commercial capital and around 430km from the Chinese border, the airport is regarded as sitting on a strategic trade junction along China's multi-continental Belt and Road initiative (BRI) to develop modern infrastructure and associated investments.

TAV Airports president and CEO Sani Sener said: “We’re happy to add Almaty Airport, which is a main transit hub between Asia and Europe, to our portfolio. Almaty is strategically located on ‘the modern Silk Road’, established from China to Europe and Africa through air transport.

“Kazakhstan is the largest country in the region—both geographically and economically—and Almaty is the largest city in the country controlling 20% of Kazakhstan’s GDP. We believe there’s a significant potential for growth in Almaty Airport, and drawing upon our extensive know-how, we’ll work towards realizing this potential to the fullest.”

Kazakhstan’s flag carrier Air Astana is based at Almaty Airport, while Bek Air, SCAT Airlines and Qazak Air also operate out of the hub..

The airport served 6.4mn passengers last year, up 13% y/y, according to TAV, a member of Groupe ADP. The airport, it added, accounted for half of passenger traffic and around 70% of cargo traffic in Kazakhstan (assessed cargo volume based on 2018 data).

TAV Airports bills itself as having a global footprint with 100 airports in 30 countries and as providing integrated services in all areas of airport operations. It said it served 218mn passengers in 2019.

Through subsidiaries, TAV is active in airport service businesses including duty-free, food and beverage, ground handling, IT, private security and commercial area management.