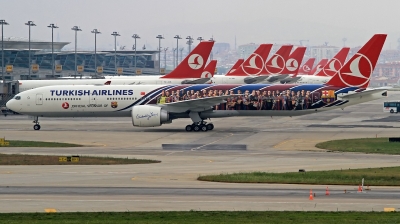 Turkish Airlines might be going nowhere without a bailout. / Mertborak, Creative Commons.
By bne IntellIiNews October 2, 2020

Capital or financing support could be provided to the flagship carrier by the Turkey Wealth Fund (TVF) though nothing had yet been finalised, Reuters reported four sources as disclosing on October 2. It was unclear how much funding the TVF could make available in what one source called a “bailout”.

The performance of Turkish Airlines, which flies to more destinations worldwide than any other airline, has been battered by the coronavirus (COVID-19) pandemic which halted nearly all of the carrier’s flights.

Turkish Airlines recorded a second-quarter loss of Turkish lira (TRY) 2.23bn ($287mn) when virus lockdowns at home and abroad were most widespread. It has agreed with a labour union to cut wages by 30-50% until the end of 2021 in a plan that avoids layoffs.

“It is very clear that Turkish Airlines is in need of a bailout programme. This could be capital support or financing support,” one source was quoted as saying.

They added that TVF has conducted a broader study of struggling Turkish companies in the transportation and tourism sectors, implying that other bailouts could be forthcoming.

TVF owns 49.12% of Turkish Airlines. The airline has a market capitalisation of TRY14.6bn. Its shares have dropped 31% since borders were temporarily closed and domestic and international flights were halted after February. They rose 2.5% after the funding news on October 2.

Reuters noted that Turkish Airlines chairman Ilker Ayci said after the second quarter the airline felt “very comfortable” with the $1.7bn of cash on hand, credit lines and other funding capacity it had until the beginning of 2021. But it expects to burn up to $350mn per month through year end, when net debt is expected to be some $14bn.

Uzbek media outlet Spot has compiled a list of Uzbekistan's domestic banks in terms of their profitability following the release of 3Q results. Its analysis showed that almost all of the financial ... more