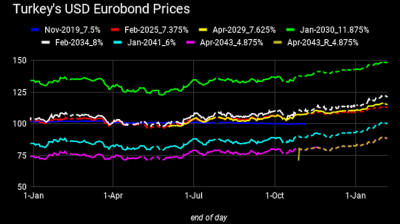 The Turkish Treasury has mandated Citi, Deutsche Bank, JP Morgan, and Societe Generale to sell USD-denominated dual-tranche eurobonds due 2025 and 2030, the finance ministry said on February 6.

Initial price guidance for the 5-year paper stood at around 4.65% and for the 10-year paper at around 5.65%, Reuters quoted unnamed bankers as saying.

It is expected that the auction will be completed on February 6, they added.

Market players were awaiting a eurobond sale by the Turkish Treasury that traditionally arrives in January, but the auction has instead been scheduled for the start of February.

Turkey’s 5-year credit default swaps (CDS) have been below 240bp since last month, marking a sharp decline from levels above 410bp seen last October. A record 566bp was recorded in September 2018 after the lira crisis.

Fitch’s rating review releases for Turkey are expected on February 21 and August 21. Moody’s reviews are scheduled for June 5 and December 4 while S&P on January 31 affirmed its Turkey rating. It is set to release its last scheduled review for this year on July 24.

To date in 2020, four Turkish lenders have sold a combined $1.9bn worth of eurobonds. Coupon rates have shown significant declines compared to last year because of the latest wave of collective monetary easing.

Coronavirus fears have been weighing on some investors’ minds, but the mood among EM investors was buoyant as EM debt inflows reached $29.7bn in January, Global Capital reported on February 5.

For emerging markets globally, the numbers were similarly spectacular with $108.2bn issued this year versus $62.8bn in the same period in 2019.

New issues in the secondary market have mostly performed strongly, and high redemption volumes this year will have investors flush with cash, Global Capital also noted.

On February 5, Turkish government-run Halkbank, which is in trouble with the US judiciary for allegedly engaging in a conspiracy to evade Iran sanctions, said in a stock exchange filing that it had successfully redeemed $750mn worth of 7-year eurobonds.

On February 5, government-run Vakifbank said in a stock exchange filing that it received the proceeds from the sale of $750mn worth of 5-year eurobonds that will pay a 5.25% coupon.

The note was printed on January 5 at the tight end of initial price guidance, at a price of 99.458, Global Capital reported on January 30 in a story entitled “Vakifbank opens wider after tight print”, noting that the senior unsecured deal started at 5.875%-6.0% before being revised to 5.625% area and then 5.375%-5.50% thanks to a book that reached higher than $4.3bn at its peak.

However, the note was seen below re-offer in London’s secondary market on the morning of January 30.

On February 3, Vakifbank redeemed $500mn worth of 10-year Basel 3-compliant Tier II subordinated eurobonds after exercising its option to recall the paper at the end of the fifth year.

The next scheduled eurobond redemption by a Turkish issuer is set for April 22 when the Industrial Development Bank of Turkey (TSKB) will redeem $350mn of 5-year paper, already refinanced last month.

So far, all Turkish issuers, except Yasar Holding which will repay on May 6 $172mn of a 6-year paper, have refinanced their scheduled eurobond redemptions for 2020.