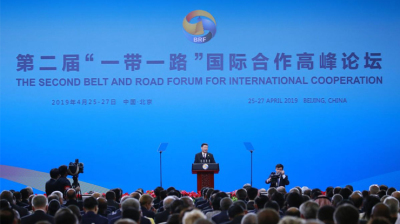 Claiming wariness of debt-trap diplomacy, Turkey has opted to not attend China’s three-day Belt and Road Initiative (BRI) forum that started on April 25.

Intended to promote Chinese leader Xi Jinping’s “project of the century” to deploy modern infrastructure to revive ancient ‘Silk Road’ trading routes between Asia and Europe—as well as build new links in the Middle East, Africa, and South America—the summit will draw ire from critics who see it as an attempt at cementing Chinese influence around the world by financially binding countries to Beijing.

Turkey is among the countries that are missing this second such BRI summit, having attended the first. Turkish officials have communicated that both their rejection of debt-trap diplomacy and the diplomatic row between Ankara and Beijing over China’s treatment of the Uighurs, a Turkic Muslim minority in Xinjiang province, are two key reasons behind their non-attendance.

In late March, the arrest of four Turkish executives in China for tax evasion led to speculation that Beijing was firing a shot across Ankara’s bows to warn the Turks of the economic price they would pay if they kept up their stinging criticism of the Chinese crackdown on the Turkic peoples of Xinjiang. Turkey’s Hurriyet Daily News reported widespread panic broke out among Turkish attendees at the Xiamen International Stone Fair after news of the arrests, with businesspeople grabbing any flight they could out of mainland China for fear that they might be detained next. One attendee reportedly vowed never to return to China, saying he was lucky to find a place on the first plane out.

Other absentees from the BRI summit are Poland, Spain, Fiji, Sri Lanka, and Argentina, according to the Eurasia Group.

Generating “legitimacy”
“The overall purpose of the BRI is to generate legitimacy for the Chinese leadership and the Chinese Communist Party more broadly,” Thomas Eder, a research associate at the Mercator Institute for Chinese Studies, was quoted as saying by the Guardian.

“Such prestige is bolstered by every government signing a BRI memorandum of understanding and every head of government attending a grand BRI summit in Beijing. These countries allow Xi Jinping to then tell Chinese citizens that the entire world is endorsing his policies and that he is the one to have put China firmly back at the centre of the global stage.”

The event is to be attended by 37 leaders as well as top ministers, including Russian president Vladimir Putin, Italian prime minister Giuseppe Conte (Italy has become the first G7 nation to endorse the BRI), UK chancellor Philip Hammond, Pakistan’s prime minister Imran Khan and the heads of state of the 10 Asean (Association of South-east Asian Nations) states. The US is reportedly sending low-level delegates, while China’s arch-rival India is not attending.

BRI urged to quit coal
Environmentalists, meanwhile, want to see the BRI quit coal. Chinese companies build coal power projects around the world and such projects accounted for as much as 42% of China’s overseas investment in 2018, according to the China Global Energy Finance database.

On the eve of the forum, a poll was published showing that people living in countries along China’s new “Silk Road” routes favour investment in renewable energy over the construction of coal-fired power plants.

Environmental group E3G, which commissioned the poll of more than 6,000 people from YouGov, said more than 85% of those surveyed favoured investment by foreign governments, banks and companies in renewable projects. Less than a third said they favoured investments in coal. More than 90% said solar power should be a priority. Coal-fired power was less popular than nuclear energy in four of the six countries surveyed. The six were Indonesia, Pakistan, the Philippines, South Africa, Turkey and Vietnam.

There is anxiety that China is using the BRI to export substandard polluting technologies, even while it ups the share of renewable power at home.