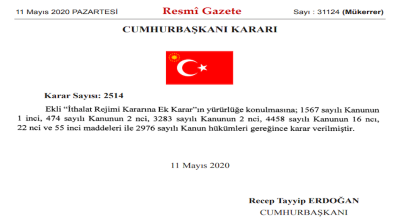 Turkish President Recep Tayyip Erdogan has imposed a new import tariff of 30% on hundreds of goods including dishwashers, freezers, jewellery, musical instruments and sanitary products, according to a presidential decree published in Turkey’s Official Gazette on May 11.

The long list of items affected includes around 400 industrial products in all.

Erdogan has been issuing import tariffs on various products since April.

Given the statistical approaches to measuring prices of national statistical institute TUIK, no impact is expected in headline inflation. Opposition politicians have raised concerns about alleged hokey-pokey seen in inflation sub-components, but officials deny there is anything to worry about.

The additional tariffs have been targeted at consumption goods. The first days of May saw tariff hikes applied to a very limited number of items classified as intermediate goods.

Turkey’s oil imports in April fell sharply to a value of $908mn—making oil the country’s fourth largest import item—from $3.51bn a year ago. Oil has traditionally been the highest-value import item for Turkey, which is almost entirely reliant on imports to meet its energy needs, but the oil price crisis that has arisen in tandem with the coronavirus (COVID-19) emergency has pushed it down the ranking.

The government sells the oil price collapse as justifying the presented official inflation and current account data—but fuel prices for consumers and the trade deficit are on the rise.

The largest import item in April was machinery imports. The item was valued at $1.41bn, down from $1.88bn a year ago. Machinery imports may fall in the coming months given the low capacity utilisation rates and cuts in investment budgets amid the COVID-19 squeeze.

The second largest import item in the month was consumer electronics, given a value of $945mn, down from $1.3bn a year ago. The government has applied tax hikes to this item since April and Turkish lira depreciation should also help here.

“[Turkey’s] exports have since [April] collapsed and foreign currency receipts from the tourism sector have dried up. All of this has been exacerbated by large capital outflows,” Jason Tuvey of Capital Economics said on May 11 in a note entitled “Turkey and the rising risk of (another) currency crisis”.

“Import compression currently seems to be the preferred route. In late-April, the government imposed tariffs of up to 50% on imports ranging from textiles to cars. And earlier in May, customs officials were reportedly told to step up physical inspections of all imports before the move was quickly reversed,” he added.

“Meanwhile, the authorities have started to impose soft capital controls. Last year, Turkey’s banking regulator (BRSA) requested that banks wait one day before settling retail FX transactions valued at over $100,000 (the previous practice was to settle on the same day). And there have been efforts to stymie speculation against the lira. On 7th May, the BRSA announced that banks’ lira-denominated transactions with foreign firms will be limited to just 0.5% of their equity, compared with a previous limit of as much as 10%. And several foreign banks were (temporarily) banned from trading lira,” Tuvey also noted.

“But,” he cautioned, “the experience from other countries is that steps to constrain imports ultimately result in shortages of goods and disruptions to economic activity. What’s more, it’s not clear that capital controls would be effective in Turkey. Capital controls tend to work best when the state has strong control over the financial system in order to prevent leakages and when controls are focused on restricting residents’ ability to take money out of the country. In Turkey’s case, it’s not clear that officials have the necessary experience or infrastructure in place to prevent leakages, resident capital outflows are small and fears that controls will be widened may simply deter foreign investors.”

“More fundamentally, neither import compression nor capital controls deal with the fundamental problem of high inflation. Inflation in Turkey is much higher than in its major trading partners and so the lira is under constant pressure to depreciate in nominal terms to prevent the real exchange rate from appreciating and eroding Turkey’s external competitiveness,” Tuvey added.

The analyst also made plain his concern about potential upcoming bank defaults.

On a positive note for Turkey, the European Bank of Reconstruction and Development (EBRD) is showing an abiding commitment to the country despite its troubles and no major defaults in external debt repayments have been reported as yet.

The new funds follow the $100mn extended by the EBRD to Enerjisa last December. They are denominated in Turkish lira to avoid a currency mismatch. The loan is linked to the new Turkish Lira Overnight Reference Rate (TLREF) benchmark, the EBRD said on May 12 in a press release.

The development bank has invested €450mn in Turkey so far this year. It will invest at least €1bn in 2020 as a whole, Suma Chakrabarti, head of the EBRD, told Turkey’s government-run Anadolu Agency news service on May 12.

The lender invested €1bn in Turkey last year and has committed a total of €12bn since 2009.

Meanwhile, the government has been acting according to the motto of “the best defence is a good offence” on the lira trading table. Following last week’s damaging bout of lira depreciation—in which the currency fell to an all-time low of 7.2685 versus the dollar—the USD/TRY rate by around 17:00 on May 12 had recovered to 6.9927, after gaining 1.1% on the day.

However, multiple quotes for the lira across global markets have appeared, just as they did during the currency’s last turbulent chapter, which occurred in March last year prior to the Turkish local elections. Quotes for the value of the lira were a bit lower in local markets on May 11 compared to offshore quotes, Reuters reported.

“It’s only a short-term boost for President Tayyip Erdogan. His cajoling of the central bank to keep rates low has caused investors to dump the lira. With foreign currency reserves dwindling, he will need to find ways to boost the currency by the back door, such as trading restrictions. The little that’s left of the central bank’s credibility will pay the price,” Reuters commented on May 11 in its Breakingviews bulletin.

“CRY ME A LIRA” was Reuters’ comment on Erdogan’s short-lived row with BNP Paribas, Citigroup and UBS, in which Turkey’s banking watchdog banned the trio from FX market trading as the lira hit its new rock bottom.

The plummeting lira and Turkish accusations that unnamed foreign banks mounted a “manipulative attack” on the currency revived memories of the country’s 2018 currency crisis, the news service noted in its daily Take Five bulletin, under the heading of “REHEATED TURKEY”.

“A muddle-through scenario is possible, we believe. The heavy external debt repayment schedule for May and June will probably keep the volatility in TL high,” Unlu & Co said on May 12.

The collapse in lira returns remains a solid backdrop behind the appetite for depreciation in the local currency. Lira deposit rates at local lenders have fallen to as low as 6% due to the deposit compression strategies pursued by some banks to comply with the lately imposed active lending ratio, BloombergHT reported.

Leading emerging market countries including China, Hong Kong, Brazil and Turkey have burned through $240bn in FX reserves over the past two months, Bank of America said on May 11.

Turkey and Egypt saw particularly large declines in held reserves while Turkey and Romania stood out for having official reserves that did not fully cover their 12-month short-term external debt repayments, it added.