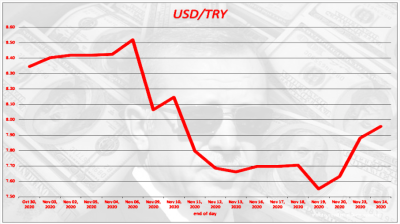 Turkey’s banking watchdog BDDK will scrap the asset ratio slapped on local banks at end-2020, the regulator said on November 24.

In April, the BDDK introduced the ratio to push lenders to boost loans, curb FX deposits and deposit rates, buy government bonds and swap their FX with the central bank.

The move was widely expected with the embattled Erdogan administration attempting to launch a new market-friendly period. The new policy phase brought about by the relentless collapse of the Turkish lira (TRY) began with the firing of the central bank governor on November 6, the resignation of the finance minister two days later and the November 19 introduction of a chunky rate hike, with the main policy rate pushed up 475bp to 15%.

There is now market anticipation that the central bank will scrap the reserve requirement rules that award banks with high loan growth rates and punish those with low rates.

Officials hope the moves will stop the rot when it comes to the TRY depreciation but the currency has been back on the negative path since November 19. November 24 saw it fall back over the 8-level against the dollar, hitting 8.05.

“Feels very 2018 [which brought the August lira crisis]. The CBRT [central bank] moved and hiked rates last week, and by 475bps which was good, but the messaging from locals is that was not really enough… In 2018 they had to aisle rates to 24% in the end, versus 15% now to draw a final line in the sand,” Timothy Ash of Bluebay Asset Management wrote on November 24 in a note to investors.

“Turkish lira is back as king of volatility. All that was ‘great’ over past 2 trading weeks is gone today. Headline risk remains an issue for Turkey, but if you need volatility, TRY and TUR [iShares MSCI Turkey Exchange Traded Fund/ETF] are great,” The Market Ear wrote on November 23.

“The great ‘derivative’ of Turkey is Spanish bank BBVA [see graph below]. Sure, BBVA is selling the US business, but that is now priced in. We are seeing some early reversals in Europe today, especially in the most squeezed indexes such as IBEX. BBVA vs TRY inverted [chart below] have widened a bit lately. If Europe finds some resistance here, BBVA could be looking to close some of the gap relative to the TRY,” it added.

Oligarchs trying to derail Ukraine’s privatisation programme, warns the head of Ukraine’s State Property Fund
9 hours ago
International Ice Hockey Federation (IIHF) has stripped Belarus of the right to hold the World Championship this year
11 hours ago
Russian opposition activist Navalny calls for supporters to take to the streets this weekend
22 hours ago
Armenia ‘to extend life of its 1970s Metsamor nuclear power plant after 2026’
18 hours ago
Turkcell denies any affiliation with $1.6bn loan in default extended by Ziraat Bank to Virgin Islands company
2 days ago