Turkey ‘to sign $2.7bn compensation deal for pre-war work carried out in Libya’ 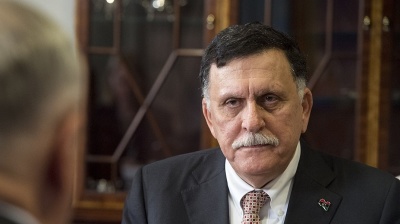 The internationally recognised Libyan government of Fayez al-Serraj (pictured) has been making business and maritime delimitation deals with Turkey, while Ankara has responded to its requests for military assistance.
By bne IntelliNews January 10, 2020

Turkey reportedly plans to sign by February a preliminary $2.7bn compensation deal for work carried out in Libya before the 2011 civil war.

The move would form part of a plan to revive Turkish business operations in the north African country, which were stalled when rebels overthrew dictator Muammar Gaddafi nine years ago. First, however, there is the not so small matter of securing a satisfactory outcome from the ongoing Second Libyan Civil War largely being fought by Fayez al-Serraj's internationally recognised Government of National Accord (GNA) in Tripoli—supported by Turkey, including with the recent deployment of some military advisers and possible dispatch of a proxy force of Free Syrian Army militants—and Libyan National Army (LNA) forces from East Libya led by Khalifa Haftar—a warlord backed by Russian mercenaries and Egypt and the United Arab Emirates, which have lent air support. Calls this week for a ceasefire, made jointly by Turkey and Russia, were rejected by Haftar.

Turkish businesses have long been active in Libya, much of which was ruled by the Ottoman Empire for three centuries, but post-Gaddafi projects have been disrupted by turmoil.

Muzaffer Aksoy, chairman of the Turkish-Libyan Business Council, told Reuters on January 10 that Turkey and Libya were close to signing a memorandum of understanding (MoU) on unpaid debts owed to Turkish contractors by Libyan creditors. "Work on the MoU regarding the old contracts is reaching an end. The problem of unpaid debts, damages and a letter of guarantee will be solved," Aksoy was quoted as saying in an interview.

Set to be signed later this month or in February, the deal will purportedly encompass a $1bn letter of guarantee, $500mn for damages to machinery and equipment and unpaid debts of $1.2bn.

With current projects in Libya on hold due to fighting, the backlog of Turkish contract work in Libya amounts to $16bn, including $400-500mn for projects which have not yet begun, Aksoy was also cited as saying. He added that despite the disruption, Libyan-Turkish trade remains buoyant, with Turkish exports reaching $2bn annually and imports at $350mn.

"New contracts had been signed: projects like power stations, housing, business centres. Signatures have been signed for letters of credit for some of these. However, since April they [Turkish contractors] have not been able to go [to Libya] for security reasons," Aksoy was reported as adding.

Turkey’s backing of Libya’s GNA is also spurred by the objective of protecting and exploiting a bilateral agreement concluded last December with Tripoli on the delimitation of maritime borders in the Eastern Mediterranean. Greece has angrily rejected the deal, saying it entirely ignores the presence of the Greek island of Crete. Turkey no doubt aims to use the agreement to bolster its claims to offshore gas and oil exploration rights.

For years, Turkey has been at odds with Greece and Cyprus over Eastern Med rights. Turkey and Greece have been in negotiations for more than half a century to find a settlement to their dispute over the sharing of resources in the Aegean as well as the Mediterranean. Last year, meanwhile, saw a big escalation of Turkey’s dispute with Cyprus over hydrocarbon resources that Ankara aims to ensure are shared with Turkey and the Turkish Cypriots that run a breakaway territory in the north of the island.