Turkey ‘treads carefully’ as benchmark rate is cut by 50bp 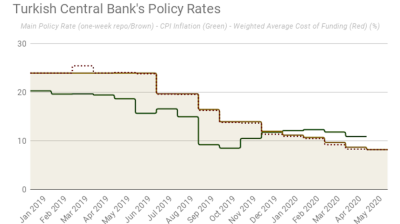 Turkey’s central bank on May 21 cut its benchmark interest rate by 50bp to 8.25% in line with market expectations. Some analysts saw it as treading carefully, not wishing to disrupt the Turkish lira’s ongoing modest recovery from the all-time low it hit on May 7.

“Relatively limited from the CBRT [Central Bank of the Republic of Turkey]—only doing 50 bps,” Timothy Ash, senior emerging markets strategist at Bluebay Asset Management, said in a note, adding: “Guess the lira is still not yet out of the woods.”

“Today was a rare display of caution," said Phoenix Kalen of Societe Generale. Commentary put out by the CBRT with the rate-cutting announcement “seems to imply that the central bank is temporarily done with its easing cycle", Kalen added, noting however that it did not rule out further “modest" cuts ahead.

Turkey has burnt through foreign currency reserves defending the lira and has so far only had rather limited success in arranging swap lines with foreign central banks to secure additional FX, achieving a deal with Qatar but no breakthrough as yet with either London or Tokyo despite some speculation on the market that agreements were possible.

The Turkish lira (TRY) was hardly changed day on day against the USD following the rate cut, trading at 6.7870 at around 22:40 Istanbul time, versus the historical low of 7.2685 recorded two weeks ago.

Prior to the coronavirus (COVID-19) crisis that began taking chunks out of Turkey’s $750bn economy in late March, the Erdogan administration was already straining almost every sinew to credit-fuel a recovery from the recession that struck the country in 2019 as a result of the August 2018 lira crisis. It built up a notable fiscal deficit in the process and the recovery that was under way had created few jobs.

The rate cut means the key rate has been eased by a whopping 1,575bp since July last year with the regulator implementing nine rate reductions in a row. Borrowing costs, when adjusted for April’s annual inflation rate of 10.94%, were already below zero before the latest rate move.

In a statement accompanying the announcement of the rate decrease, the CBRT monetary policy committee said Turkey’s economy may have bottomed out earlier this month under pressure from the coronavirus pandemic. The committee said it perceived a “pronounced” weakening in April, but noted that the first two weeks of May showed signs of “bottoming-out following the steps taken towards partial normalization”.

There are serious concerns about the viability of the methods used by Turkish statistical institute TUIK in calculating inflation, but also on May 21 the central bank lowered its year-end inflation projection from 8.2% to 7.4%, pointing to cheap commodities prices. That indicated further rate cuts could be in the pipeline, with the country threatened by another recession given the additional strains placed on its fragile economy by the effects of the pandemic.

Anxiety over rush for dollars

Meanwhile, concern has grown that Turkey’s push for faster credit growth is inadvertently eroding returns on lira savings, with officials anxious the situation could spark another rush by Turks for dollars. The government in April set ambitious asset ratio targets for banks to boost lending, but instead of rolling out new loans to comply, some private lenders started aggressively slicing interest rates on deposits.

“Lira deposit rates follow policy rates very closely,” Barclays economist Ercan Erguzel said in an emailed note quoted by Bloomberg on May 20. “Bigger cuts on top of current levels, without a further drop in inflation expectations and/or actual inflation, would likely affect the dollarization trend, which has been stable for a while.”

Following the introduction of the new asset ratio regulation, the average rate Turkish lenders offer for lira accounts dropped to 8.4%, the lowest level since November 2013 and well below consumer inflation.

President Recep Tayyip Erdogan has complained that the private banks in Turkey are not doing enough to help Turkey strengthen economically and he has lately threatened to punish anybody who “smuggles” dollars abroad.