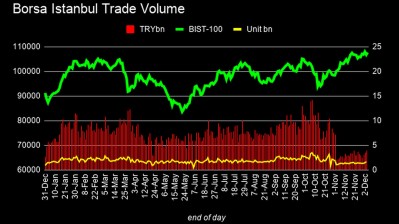 “There is more room to go” in rising Turkish bank share prices “but that will likely only materialise in early 2020”, VTB Capital analyst Akin Tuzun wrote in a December 4 note entitled “Winter is not coming”.

The Russian investment bank advised last month that they were expecting a 10% rise in Turkish banks in November and they delivered 9.6% on strong earnings.

Turkish equities reinstated their rerating trend in November, after a pull-back in October amid geopolitical risks, he added, noting: “The MSCI Turkey Index and MSCI Turkey financials index rose 7% and 10%, respectively, outperforming the EM space by 7% and 11%. The P/E re-rating of Turkish banks has mostly been completed based on the new COE outlook, but now it is time for earnings-based price uplift. The October banking sector data revealed the first signals of this earnings recovery, particularly for the state and foreign banks.”

Foreign institutional investors still appeared to VTB as “reluctant to increase their Turkey weights, as the year is almost over, but we expect some increase in positioning in December, in anticipation of larger potential long-only inflows as the new year starts”. 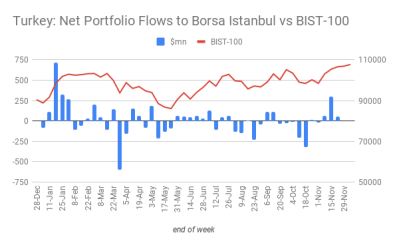 The analyst added that it expected the Turkish central bank to end its easing cycle, which has seen rate cuts amounting to 1,000 bp since July, with one final cut of 100-200 bp on 12 December. In Tuzun’s view that “would not … distort the stability of the Turkish lira, given the favourable global backdrop. We continue to recommend buying the market on weakness, particularly the banks.”

Turkey’s loan recovery remained on track with private banks’ participation, the note said, adding: “The loan recovery that started three months ago continues to maintain its pace, particularly in the consumer loan space. The three-month annualised consumer loan growth has now reached 46%, followed by lira commercial loans of 26%. The private banks have also joined the trend—particularly in the past two months.”

From another perspective, Bloomberg on December 3 reported on signs that foreign investors in Turkish stocks are locking in gains with fear of US sanctions being imposed on Ankara mounting.

In the first half, foreign investors were net buyers of $851mn in Turkish equities, according to central bank data, but outflows since the end of June exceeded $380mn as of November 22.

Turkey has lately tested radar systems for acquired Russian S-400 missile defence systems to the ire of many in the US Congress, while its invasion of northeast Syria continues to rankle with allies and officials in Washington. Sanctions—should US President Donald Trump allow them to be imposed against Turkish counterpart Recep Tayyip Erdogan, who he treats as a man he can do business with—could limit any gains in Istanbul stocks, leaving investors facing geopolitical risks disproportionate to their potential returns and the sanctions factor is being widely underestimated, according to Cristian Maggio, head of emerging markets at TD Securities in London, as quoted by Bloomberg.

Describing sanctions as “a big risk” made worse by a lack of visibility on their timing, he was cited as saying: “Sanction risks are not so relevant until they become relevant, and the frequency of news on the matter, the kind of statements, the perceived direction of diplomacy and many other, to some extent subjective, factors determine market implied positioning.”

The Borsa Istanbul’s benchmark BIST-100 index is among the five best-performing stock market gauges in the second half of this year, up 12% since the start of July. That doubled its advance in the first six months. Government steps including a ban on short selling helped during moments of geopolitical strain, while 1,000 basis points of central bank rate cuts since July and restored appetite among investors for risk assets have helped.

“To adapt a football analogy, it’s been a year of two halves,” Nigel Rendell, a senior analyst at Medley Global Advisors in London was quoted as saying by Bloomberg.

In the first half of this year Turkey faced a slowing economy following last year’s currency crisis, tense local elections that served up shock defeats for the Erdogan administration and the initial turbulence caused by the S-400 purchase. While government measures helped stabilise the lira, they have added to uncertainty over the longer-term outlook and added to the risk premium of holding Turkish assets, Rendell added.